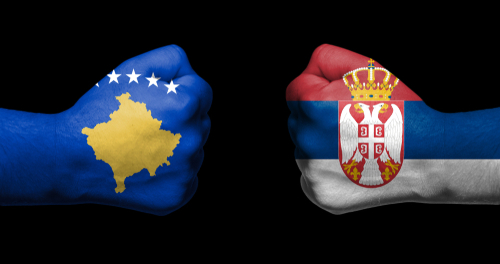 Belgium, (Brussels Morning Newspaper) The smallest country in the Balkan region, Kosovo had celebrated the 14th anniversary of independence from Serbia just one week before Russian soldiers crossed into Ukraine on February 24, 2022.

As the world recoiled in horror last month, Russia, without legitimate provocation, invaded Ukraine, a sovereign country. The crisis was a long time in the making, with important historical antecedents, such as Ukraine being a former Soviet republic, President Vladimir Putin’s long-held ambition to recreate an empire of Russian influence, and his insistence that Ukraine will never become a member of NATO or the EU.

But it is also important to understand that other historical events have played an important part in influencing Russia’s geopolitical strategy over the last two decades.

As is certainly well understood in Kosovo and the Balkans, in 1999 under the leadership of US President Bill Clinton and Secretary of State Madeleine Albright, NATO intervened with an intensive bombing campaign in the brutal internecine war between Serbia and its breakaway province of Kosovo, in which Serbia engaged in the ethnic cleansing of the Albanian majority, creating a humanitarian crisis. After 78 days, NATO prevailed and the war ended in June 1999.

As a small, south-eastern European country not very far from Ukraine, the invasion found Kosovo in a precarious and uncertain position. The war presents a wide range of possible implications for Kosovo’s future.

During the tense months when Russian units began assembling near the Ukrainian border, Kosovans were already debating whether Belgrade might use the conflict as an excuse to attack Kosovo, which declared independence from Serbia in 2008.

Indeed, there are few Europeans that better understand what Ukrainians are currently going through than the people of Kosovo, who had to endure a conflict waged by a neighboring state and fuelled by nationalist ideology a little over 20 years ago.

In the light of the ongoing events, MEP Lukas Mandl stated that In the face of the Kremlin-led aggression the unity of the democratic world is unprecedented.
– “However, there is one field where a deficiency of this unity is of deep concern and that is the recognition of Kosovo. For reasons that have nothing to do with Kosovo, five EU Member States still do not yet recognize Europe’s youngest state. Now there is a momentum to change this and to complete European unity. Therefore – and also on the occasion of the expression of strong regret by the European Parliament about Serbia’s behavior in the face of the Kremlin-led aggression on March 1st – I have sent letters to the distinguished Prime Ministers of Cyprus, Greece, Romania, Slovakia, and Spain calling on them to pave the way for the recognition of the Republic of Kosovo by their states. ” noted Mandl.
He pointed out to the media that he is grateful and it is a wonderful signal of unity that my US colleague Congressman Ritchie Torres now also wrote similar letters: For a long time the ties between democracies around the world have not been as strong as today.

Kosovo’s government established a ‘Security Fund’ and invited citizens to donate funds to the young Kosovo army. But although popular, the initiative is not expected to have any major impact on the strength of Kosovo’s military.

The government has also formed a working group on Kosovo’s NATO membership bid, which is held up by the fact that five EU member states – Spain, Greece, Slovakia, Romania, and Cyprus – do not recognize its independence.

Kosovo has a NATO presence with the KFOR mission that continues to serve as a guarantee to Kosovo’s security under the Kumanovo agreement achieved in 1999 that put an end to the NATO 78-day bombing campaign against Serbia.

Serbia continues to maintain a heavy influence in the northern part of Kosovo along the border. In Bosnia and Herzegovina, Milorad Dodik, the Bosnian Serb member of the tripartite presidency has actively threatened a separation of Republika Srpska.

The Kosovo reflections in Donbas

In 2010, the International Court of Justice, assessing a legal challenge brought by Serbia, ruled that Kosovo’s unilateral declaration of independence did not violate international law. Russia would argue that this result should apply equally to South Ossetia and Abkhazia. (I arrived in Kosovo shortly thereafter in early 2011 and remained for 28 months.)

In early January 2022, peaceful protests began in Kazakhstan, also a former Soviet republic, over a rise in gas prices, but quickly descended into violence amid rising dissatisfaction with the autocratic government and economic inequality. The government cracked down brutally, but could not control the violence and called for assistance from Russia under their military alliance. Putin responded quickly and sent Russian soldiers to help quell the disturbance, resulting in over 200 deaths and thousands of arrests.

While this situation was not directly related to the Kosovo precedent, it clearly demonstrated that Putin was willing to use military force to prop up his fellow autocrats within the former Soviet Union and to crush any popular dissent, or democratic liberalisation as has occurred in Ukraine. (I travelled to Kazakhstan for a rule-of-law assignment in 2006, and from my hotel window in Almaty, I could see the huge government building across the boulevard that was destroyed in the recent turmoil.)

During the last eight years, Russian-sponsored separatists have fought the Ukrainian military in the Donbas region of Ukraine. One of Putin’s first acts after the recent invasion of Ukraine was to recognise the independence of the self-proclaimed Donetsk People’s Republic and the Luhansk People’s Republic, two rebel territories in Donbas, utilising the Kosovo precedent as he did in Georgia and Crimea.

There is an ongoing debate as to whether the events in Kosovo actually established a precedent under international law, which is denied by Western countries.

They argue that the intervention in Kosovo was a unique situation, a one-off, because it was initiated and justified as a humanitarian mission limited to stopping the bloodbath and ethnic cleansing. But the concept appears to remain alive, at least in the mind of Vladimir Putin.

If he is successful in Ukraine, will he then move on to Moldova, another former Soviet republic that shares a border with Romania, a member of both NATO and the EU, under some flimsy guise of provocation as in Georgia, Crimea and Donbas?

If there is any upside to the ongoing Ukrainian tragedy, it is that NATO and the EU may be more inclined to integrate Kosovo into these alliances as a further bulwark against Russian meddling in the Western Balkans.