Esch-Sur-Alzette, or being European Capital of Culture 2022 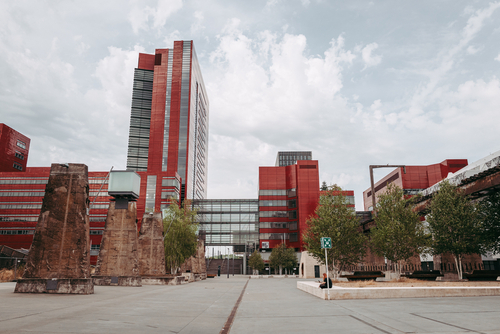 Italy (Brussels Morning Newspaper) Being a European Capital of Culture is a great responsibility: many international eyes are keenly focused on you, and institutions and potential competitor cities come to you to study your program, in order to learn the secrets of impeccable conduct.

Esch-Sur-Alzette, Luxembourg’s second-largest city, border par excellence and with an important industrial past, plays its role as the capital city with admirable openness, foresight, and mixing goals. The managing director of Esch2022, Nancy Brown, is keen to add: “Our vision for Esch2022 is closely linked to the overarching European idea. We want to encourage the ‘Minett’ region to be more united, by making the whole mining area more aware of its unique European identity and the extent of its own possibilities”.

The past of the Minett’s region, in fact, is a raw past made of miners, iron, and heavy industry; internal and external immigration, that has contributed over the decades to create that peculiar meeting of cultures and humanity that have transformed Esch from a passing city to the current capital of culture, with an ambitious and at the once concrete program.

Recognizing the dynamism and the audacious vision of the Luxembourg city, the closest to the French border, means recognizing oneself in the founding values of European culture, in the broadest meaning: collaboration, development, and sustainability. The close cooperation with the other two cultural capitals of 2022, the Lithuanian Kaunas and the Serbian Novi Sad, and the mutual exchange of artists, knowledge, and advice, reinforce tangibly the strong idea of a united Europe.

A partnership that takes shape in the artistic twinning between Kaunas and the English and French-based artist Bruce Clarke, called to realize the fresco Ecce Homo for the mine site of Thil (as well as former forced labor camp) in collaboration with the Museum of the Resistance of Esch, and also invited to the Lithuanian city to contribute with his pictorial work.

It is almost impossible to summarize in full the rich, whirling program that involves Esch and the neighboring municipalities of the Luxembourg region and the closest France area (the complete and updated program can be consulted here): among extensive concerts and festivals, of which Luxembourg is a pioneer, projections, performances, exhibitions, and long-term projects, certainly the most interesting and beneficial pars construens of the entire project, Esch2022 is a candidate to be an epicenter of cultural and tourist attraction, with the approval of an active population and the unconditional support of associations and institutions.

The great diversity of the territory rhymes with the great diversity of the offer made available, especially in the “minor” centers and adjacent to the capital. One of these is the site of Belval, the university village a few kilometers from Esch, which has benefited from the largest transformation and reconversion since industrial times. Everything in Belval speaks of its industrial past, but in a form that has nothing of the nostalgic, hard, and dusty memory of past centuries. Arrived in the heart of the City of Science, a few steps from the rail station, it seems to be for a moment projected into the environment of the Tate Modern in London: large chimneys soaring above a freshly smelled sky, that still have the red color of iron almost glowing. The visitor is blown by the milky radiance of the renovated library building, a former processing industry attached to the furnace, whose architectural design has preserved traces of iron in the external panels.

Belval is culturally re-born with the flagship building of the Möllerei (whose renovation ended in 2018); the furnace, on this occasion becomes an exhibition center where, until August 14, visitors can attend Earthbound. In dialogue with nature. An exhibition curated by Sabine Himmelsbach and Boris Magrini (from HEK, House of Electronic Arts, Basel), seems to perfectly embrace the themes of sustainability with the innovative intersections between art and technology. A concept that seems increasingly and progressively concern contemporary artistic practice, as demonstrated by the parallel exhibition in Lille, Les Vivants, at Tripostal; the program exhibited at Möllerei approaches different themes, all linked to the climate emergency and the role of technology and science in the personal perception and involvement in this topic.

There is however no apocalyptic or disastrous sentimentality in visiting the enormous space that houses the nineteen works of art; the elevation through beauty, which still remains the primordial presupposition of art production, and of existence itself, drive the main purpose of the exhibition. Crossing artificially intelligent plants, singing jellyfishes, weeping corals, scenarios and simulations of the past, present, and future, the visitor is sensitized through the experience: sensing to make sense. Among the valuable works present, a special mention for the interactive installation of the duo Marie Sissel and Jonathan Reus, The Intimate Earthquake Archive: with a piece of special equipment, visitors can experience on their own flesh the sound effects and vibratili of some of the most strongly perceptible earthquakes by humanity.

A few steps from Möllerei, in Massenoire (the “black mass”), the theme of nature is declined according to a technical and scientific approach. The exhibition Respire. Pour un-design climatique (until September 25), gathers students of the Ecole Nationale Supérieure art et design of Nancy (ENSAD), who wonder and study the effects of pollution on the most natural human act of breathing.

Breath thus becomes a political, creative act, but also a new vision for design, as demonstrated by the prototypes of the young graduates Emma Gitzinger and Chloé Guillemart. With Effluves, for example, Guillemart, through deep studies of aromatherapy and collaborations with experienced ceramists, recreates a new way of breathing and regenerating with the medicinal power of plants, creating an object of extraordinary utility and elegance.

Belval’s model is also followed by other neighboring countries, with the same dynamic spirit and willingness to re-start from the past. Dudelange, with its National Audiovisual Centre, its huge industrial sites, and the huge green spaces that are regaining power and dominating the hand of man, are evolving and preparing for an important transformation, in which the visitor can attend and participate during his Luxembourg visit.