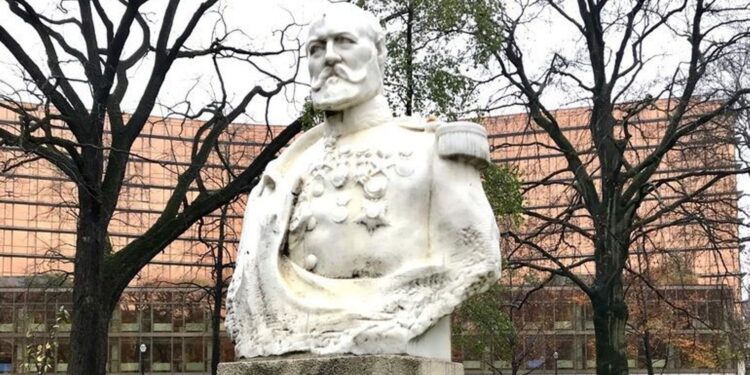 Brussels, (Brussels Morning)- The day before yesterday, on 30 June, Congo’s Independence Day, the municipal council of Ixelles decided to remove the bust of Emile Storms from Square de Meeûs. However, it committed an urban planning violation, which resulted in an official report from Urban.brussels. The Doulkeridis cabinet is falling from the sky.

June 30, 2022. Not coincidentally on Congolese Independence Day, the Ixelles municipal council decided to remove the bust of General Emile Storms from its pedestal in Square de Meeûs. Storms, a controversial figure in the colonial history of Congo and Belgium, conquered large parts of the Congo Free State at the behest of King Leopold II, not shunning the violence. His bust on Square de Meeûs in Ixelles was therefore often daubed with paint.

If it depended on Mayor Christos Doulkeridis (Ecolo), the Emile Storms monument, protected since 1972, would be removed as early as June 30, 2020, on the 60th anniversary of Congo’s independence . However, Brussels State Secretary for Heritage, Pascal Smet (One.brussels-Vooruit) then asked to wait for the conclusions of the decolonization working group and the government’s subsequent action plan.

This working group was established in 2020 at the initiative of Smet and formulated their recommendations in February 2022 on how colonial heritage should be approached. Normally, the Brussels government would take a position on these recommendations before the regional agency Urban.brussels would develop an action plan in consultation with other regional agencies and administrations.

There is no trace of Emile Storms’ bust and his pedestal in Square de Meeûs.

However, Doulkeridis did not want to wait for that last stage. “The conclusions are now there and they are in line with what I think about this issue: there is no reason to leave this statue in public space,” he told BRUZZ in May this year. Yesterday, on June 30, 2022, he put his money where his mouth is and had the bust removed.

“That didn’t quite go according to the book,” says Valérie Mertens, spokeswoman for Pascal Smet. Today, the municipality received an official report from the ISA (the sanctioning body within Urban.brussels).

“The municipality of Ixelles has committed an offence with the removal of the Emile Storms monument,” confirms Thierry Wauters. He is director of Cultural Heritage at Urban.Brussels, the service that manages the advisory body Royal Commission of Monuments and Landscapes (KCML).

“The removal of a protected statute requires an urban planning application, which the municipality has failed to apply even though it is well aware of the procedure. The KCML normally gives advice, and a public inquiry must also be held, because it is a protected square,” explains Wauters.

No position from parliament yet

It doesn’t look like Storms will ever be put back on his pedestal again. “We are now looking at how to regularise the violation,” said Pascal Smet’s spokeswoman. The intention is that the bust will be moved to a museum.

‘We have not received a PV’

In the Doulkeridis cabinet, however, things come out of the blue. “We have not yet received a PV from Urban.brussels,” says Aline Lacroix, spokeswoman for Mayor Christos Doulkeridis.

“We submitted an urban planning application in 2020, in which three conditions were formulated for the removal of the statue. All conditions have been met,” the spokeswoman said.

“First, a historical study had to be made of the park. That happened.” This showed that the marble statue of Storms is a copy from 1948 of an original older bronze statue from 1906. “The current statue is therefore not of the historical value that it should remain in public space.”

“We then had to wait for the advice of the decolonization working group. Their report was already presented in February.”

Finally, the statue had to be given a place in a museum. “There are now two options for this. Both the Ixelles Museum and the Royal Museums of Art and History have indicated that they want to place the image in its context.”