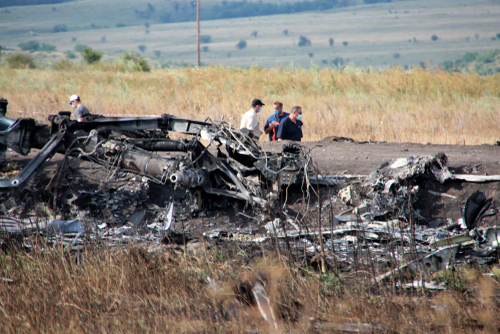 Belgium (Brussels Morning Newspaper) A Dutch court convicted three men and sentenced them to life in prison for their role in shooting down of Malaysia Airlines flight MH17 over Ukraine in 2014, in a ruling hailed by Ukrainian authorities and condemned by Moscow.

The three suspects – two Russian nationals and an Ukrainian separatist leader – were tried in absentia, and are believed to be in Russia at this time. They are former Russian intelligence operatives Igor Girkin and Sergey Dubinskiy, and Ukrainian Leonid Kharchenko.

According to the verdict, the Malaysia Airlines’ Boeing 777 was shot down over eastern Ukraine with a Russian BUK anti-air missile system, which was smuggled across the Russian-Ukrainian border earlier the same day, and was quickly returned after it became apparent that the target was a civilian aeroplane with 298 passengers and crew aboard, all of whom were killed in the blast.

A fourth suspect, Russian Oleg Pulatov, was acquitted of all charges as the court ruled insufficient evidence was brought to prove his involvement in the incident. Although Pulatov was not personally present at the trial, he was the only suspect who hired an attorney to represent him in court.

The Dutch court found the remaining three suspects guilty of helping to arrange transport of the anti-air missile system into Ukraine, in the territory controlled by Moscow-backed insurgent groups, though neither of the three were the ones who pulled the trigger on the missile.

The presiding justice, Hendrik Steenhuis, said that “there is no reasonable doubt” that the MH17 was shot down by a Russian missile system, citing ample evidence from eyewitnesses and photographs of the BUK system being moved out of Russia to the separatists’ territory and back again.

“Only the most severe punishment is fitting to retaliate for what the suspects have done, which has caused so much suffering to so many victims and so many surviving relatives,” said Steenhuis, explaining why the court awarded life sentences.

Notably, the court also determined that Moscow had “overall control” over the forces of the so-called Donetsk People’s Republic in Eastern Ukraine from mid-May. This verdict could thus have wider implications for other cases, specifically Ukraine’s international cases against Russia relating to the 2014 conflict.

Ukrainian president Volodymyr Zelenskyy welcomed the ruling as an “important decision” reached by The Hague court. “But it is necessary that those who ordered it also end up in the dock because the feeling of impunity leads to new crimes,” said Zelenskyy. “We have to dispel this illusion. Punishment for all Russian atrocities – both then and now – will be inevitable.”

Thursday’s verdict was not the final word in assigning responsibility for the murder of nearly 300 civilians. Head of police investigation Andy Kraag stressed that the investigation is also exploring culpability of persons higher up in the chain of command, as well as the crew of the missile system, which actually fired the missile at a civilian target.

The investigation was organised by the Netherlands, as 193 passengers onboard the plane were Dutch nationals. Malaysia lost 43 of its citizens, Australia 27, Indonesia 12 and the United Kingdom 10. The Dutch and Australian governments also launched a proceeding against Russia at the International Civil Aviation Organisation (ICAO) following the verdict.

Moscow, which denied any Russian presence in Ukraine in 2014, dismissed the verdict as “politically motivated,” claiming the court faced “unprecedented pressure” from Dutch politicians, prosecutors and the media.
“We deeply regret that the District Court in The Hague disregarded the principles of impartial justice in favour of the current political situation, thus causing a serious reputational blow to the entire judicial system in the Netherlands,” said the Russian Foreign Ministry in a statement.