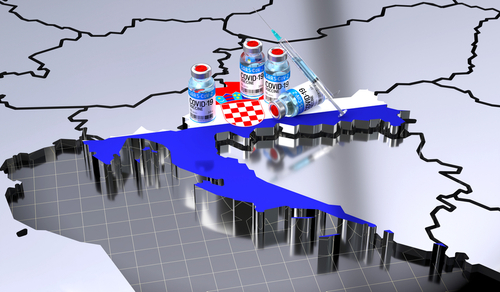 Brussels (Brussels Morning) Two weeks ago, the Brussels Eye reported on the low uptake of Bulgarian and Romanian vaccines. The two countries have been forced to sell or donate stock nearing its expiry date, with the adult population vaccinated being less than 30%. 35,000 Astra doses expired in Bulgaria and Sofia was planning to donate 150,000 Astra doses. Romania was planning to sell about 1.2 million of its Pfizer shots to Denmark.

Today, we publish an interview with a Croatian Member opposition MEP Ivan Vilibor Sinčić. He is an independent, which fits a broader political narrative of ideological non-alignment that is not uncommon among political activists who question “mainstream” policy narratives. But one should not readily dismiss the political effect of this view: in the 2014 Croatian Presidential elections, Mr Sinčić came third with a 16.42% share of the vote.

Brussels Morning does not endorse vaccine-sceptical views and we always report on public health policy guidance with a sense of responsibility. Initially, we wanted to talk to Mr Sinčić about the Croatian political system. However, he argues, there are good reasons for vaccine hesitancy fuelled by talks he had with the European Medicines Agency (EMA).

Brussels Morning sought to independently verify this communication with the EMA. Indeed, in an email exchange with the EMA, the agency confirmed communication with MEP Ivan Sinčić but referred to his conclusions as “a misunderstanding.” The EMA’s press officer, Rebecca Harding, notes that regulators have recommended the authorisation of four COVID-19 vaccines “on the basis of robust scientific data from clinical trials showing the safety, efficacy and quality of these vaccines.” These trials suggest that “… the benefits of the vaccines clearly outweigh any possible risks” and, what’s more, these vaccines “have had a major impact in driving down infection rates over the last months.” This information has been documented through independent studies, confirming public policy health guidance. “A similar and even more detailed overview was also provided to Mr Sinčić,” Ms Harding notes.

Brussels Morning: The Sputnik and Sinovac vaccines dominated the Balkan market. Do you feel Europe’s vaccine diplomacy failure will have a lasting effect in the region?

Ivan Vilibor Sinčić, MEP (IVS): Vaccine diplomacy is a strange, unnatural term. It doesn’t really matter which corporation will sell the vaccine if the vaccine works.

The problem in Europe and in the world is that we are forcing mass vaccination, without any relevant data on long term effects on the human health. The COVID virus isn’t that dangerous for us to be injecting people with experimental drugs. There is no independent confirmation that the COVID vaccines are safe or effective. I have spoken to the European Medicines Agency which confirmed {this view) and I also made my own research within the scientific community.

Brussels Morning: According to Transparency International, Croatia fares worse on perception of corruption than it did when it joined the EU. Do you feel the government is doing enough to address the crisis at hand?

(IVS): Corruption in Croatia is a normal thing, which is sad and disgusting, but the people too often vote for the same corrupt parties, so we must change that first, and the rest will follow. The political system is the root of all problems.

The corrupt government cannot fight corruption. It is just a pretence without any real results or progress. The worst thing is that the EU is supporting and funding that government and the model they use instead of doing the opposite. When joining the EU, Croatian people expected it will solve our corruption problems but it has become worse. TIC confirms that.

It can also be seen, in this COVID crisis, how it works. The government is working hard to sell the vaccines. They seem to forget that they are working for the Croatian people, not the pharmaceutical companies.

The government took the wrong strategy regarding the crisis at hand. Fear campaigns and lockdowns have a deteriorating effect on people’s mental and physical health. They have devastated the economy as well. The only normal solutions are to open everything up, make masks and vaccines non-obligatory, forget about the tests and let the people live their lives. Much like Sweden.

Brussels Morning: Croatia, Portugal, and Greece are economies founded on small businesses that greatly rely on tourism. Do you feel there is adequate coordination on EU level to respond to the specific needs of the tourist industry?

IVS: There is no adequate coordination on EU level. The EU can help people and companies to develop and produce food locally.  The essence of tourism must be producing local products and selling them to tourists through accommodation, especially local food. Croatia mostly does not do that, but imports food from other countries. There is no real plan or goal how to develop tourism in Croatia – almost everything is spontaneous and that is the failure of the government.

Things should also be done sustainably and they are not. Croatia is dependent on the tourism sector more than any other economic activity. The most urgent need is good waste management and an accelerated transition to a green energy and transport system. As regards to waste management, the EU has been funding bad projects that do not solve the problem but create new – air pollution, soil and water. This is not happening in the old member states – therefore, we have a lack of coordination on good solutions in tourism.

Brussels Morning: The Pelješac Bridge has been controversial as it becomes one of the first EU-funded projects to be awarded to a Chinese company and be listed as a BRI initiative. Given the controversy of Montenegrin highways, do you feel that Chinese influence in the Balkans is overall positive?

IVS: You cannot ever be sure about the intentions of China. There are big human right violations there, but then again there also (are) in other countries, like the USA.

One thing is for sure: the Pelješac Bridge is being planned and built for almost 20 years. Without the Chinese building the bridge, it would take another 20 years for corrupt and inefficient Croatian administration to build it.

I think China has their strategy and it’s working towards their accomplishment. I believe in modern independent countries working together and too much foreign influence is not good. If Europe wants to do better, there needs to be more effective way of doing things, and we need to let the countries decide on their own. Too many common policies are not good – it is breaking the EU apart.

Brussels Morning: According to the RSF index, Croatian journalists who investigate corruption, organised crime or war crimes are often subjected to harassment campaigns. Do you feel the government is doing enough to protect freedom of speech in Croatia?

IVS: The government is doing everything they can to fight freedom of speech and freedom in general in Croatia. They don’t want to fight corruption because they are the corruption.

They have even taken over much of the media, both public and private, which are under political influence or are dependent on advertisement by public companies and government money. The director of Croatian national TV station was arrested just a few days ago because of corruption. The entire station is a toy of the government.

There was even a big protest organised by the journalists a few years ago named: “You have taken the media but you want journalism”. It is so sad. It is not easy to be a journalist these days, especially for an investigative journalist.

Brussels Morning: Why is Croatia stopping the release of the CoE’s Committee for Prevention of Torture report on Croatia? It’s finished and awaiting approval from the government to be published.

IVS: The Committee for the Prevention of Torture has been established by the Council of Europe to monitor prison conditions and the treatment of prisoners in its member states according to the European Convention for the Prevention of Torture. I am not exactly sure why they are stopping the report.  But the situation in Croatian prisons is not good. There are too few prison cells and people wait for years to serve their time in prison. The cells themselves are often overcrowded. Also, there are not enough prison guards of the “judicial police,” as they are called in Croatia.