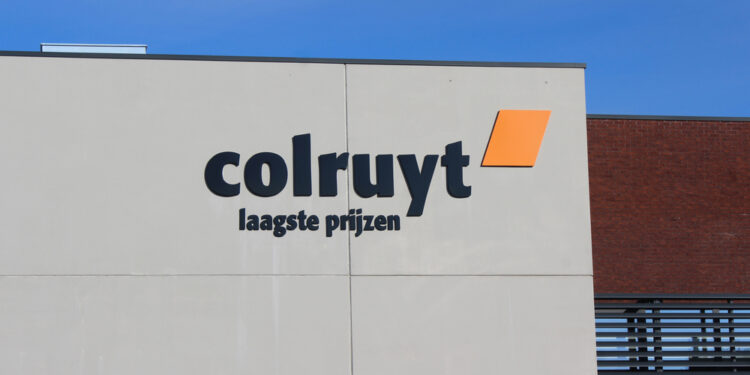 Brussels, (Brussels Morning)- Supermarket chain Colruyt will soon start home delivery, starting in Brussels and Antwerp. The company from Halle is also targeting the major cities for the further expansion of the retail network. Colruyt wants to grow with additional stores in Brussels, Antwerp, Ghent and Liège.

According to Jo Willemyns, as COO Food Retail and Marketing Services responsible for the food stores of the Colruyt Group, there is still room to invest in the retail park in Belgium, France and Luxembourg. “There will be more stores for the different formulas,” says BRUZZ. There is still room for growth, especially in the big city, for Colruyt in its own country Brussels, Antwerp, Ghent and Liège. “Historically, we have a lower market share there, and we now want to close that faster,” said Willemyns.

Colruyt will not work with a franchise formula like other players in the sector, but with integrated food stores – stores under its own management. To this end, the company behind chains such as Colruyt, OKay and Bio-Planet is looking at the existing retail formulas, new formulas that the group is developing such as OKay Direct, and also e-commerce.

Colruyt customers can already order their groceries and collect them at a collection point via the Collect&Go collection service. That concept, the “classic pick-up”, works very well in rural areas and the suburbs, it sounds like, but Colruyt wants to go further.

“We will soon start with home delivery. We will organize this with our own drivers from our e-DC in Londerzeel (distribution center for e-commerce, ed.). We will start with Brussels and Antwerp, the big city”, Willemyns said. Colruyt has selected a number of municipalities in those cities for the start-up.

Afterwards, Colruyt wants to further roll out the service, mainly looking at population density and purchasing power. Next week, Colruyt – the group also publishes the annual figures – will announce and provide details of the home delivery service, he clarified.

There were previously test projects with home delivery, but the rollout has not yet happened.

Deliver for each other

Furthermore, Colruyt will continue to operate on the so-called ‘peer-to-peer network’. Customers deliver the ordered groceries to each other. The number of regions will be expanded. More generally, Colruyt also focuses on fresh bakery products and Food Bag food boxes.

“We continue to guarantee the lowest prices. Black on white, every day. Above those lowest prices, there are promos that we clearly indicate in red,” the COO recalled the recent adjustments to the system with the ‘red prices’ .

The company also has its own fitness chain, Jims, also sells bicycles with the Bike Republic chain and owns toy chain Dreamland and Dreambaby, which sells baby items, or fashion store ZEB.

CEO Jef Colruyt clarified that it is active around four core areas. Nutrition, health and well-being, non-food and finally energy. Colruyt Groep is more than a shopkeeper, it was said. According to the CEO, these four areas account for about a quarter of the household budget.

Food remains the most important, but the company has also often taken new initiatives over the years. Jef Colruyt also pointed to the very challenging market conditions. After all, geopolitical stability was jeopardised after corona. Prices are going up considerably. According to the CEO, dialogue will therefore be necessary with suppliers and players in the chain.

The group is also focusing on hydrogen through gas station chain Dats24. According to Colruyt, this fuel must offer the future for heavy transport. By mid-2023, there should also be a thousand charging stations at the shops for electric vehicles and the group has just invested in a new charging station project.