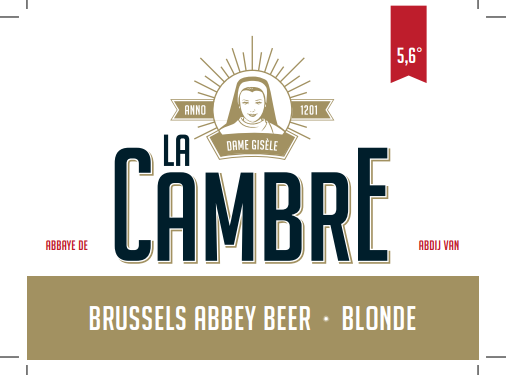 The Brussels abbey beers La Cambre are back. At the end of last year it was announced that production would move to the Mechelen brewery Het Anker. According to a report by BRUZZ, It is now launching two new beers under that name.

As announced last year, the Brussels abbey beers La Cambre have recently been brewed by the Mechelen brewery Het Anker. To this end, the brewery concluded a long-term licensing agreement with the church factory of La Cambre and the Archdiocese of Mechelen-Brussels.

With the relocation of the brewing process, the range was also adjusted. After a transition phase, Het Anker now produces both a blond abbey beer and an IPA beer. The bottles and labels were given a complete make-over, although the logo was retained. Dame Gisèle, who founded the abbey of La Cambre in 1201, still adorns every bottle.

The new beers bear the label ‘recognized Belgian abbey beer’, which means that – despite the production in Mechelen – there is a concrete link with the abbey site. It also guarantees a fee for the abbey that can be used for charitable purposes or for the maintenance of the historic abbey buildings.

The new beers mean a new start for the abbey beers of La Cambre, which were created about eight years ago by a Brussels entrepreneur. He was inspired by the history of the Ter Kameren abbey, where Cistercian nuns brewed beer for their own consumption for centuries, but also for travellers and pilgrims who found their way through the abbey. With the French Revolution, the abbey lost its original religious function and with it the brewing activity.

The La Cambre beers are sold through the traditional distribution channels (beverage shops, beer shops) in Belgium, the Netherlands and France.