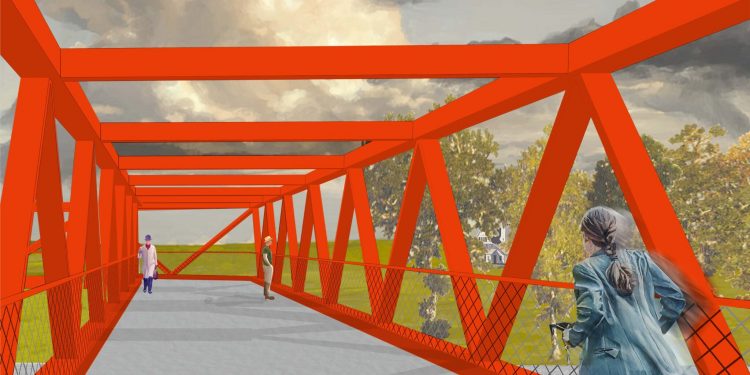 Belgium, (Brussels Morning Newspaper) On Saturday night, the two largest parts of the new bicycle bridge over the Brussels Ring were installed in Zaventem. The installation went smoothly and almost completely according to plan. The new bridge could be put into operation at the end of March.

The bicycle bridge is the final piece of the F3 bicycle highway between Leuven and Brussels. Until now, cyclists have had to make a detour of 3.5 to 4 kilometers, not always via the safest traffic situations. The new bridge, which is 168 meters long, should remedy that shortcoming. There will also be branches leading to the nearby Keiberg-Kouterveld industrial estate and to Diegem station. For example, commuters who currently come to work by car must be motivated to take the bicycle more often.

The first two parts of the bicycle bridge were already installed last weekend. This weekend it was the turn of parts three and four. Before that, the entire Brussels Ring was closed to all traffic in both directions, from Saturday evening at 10 p.m. to Sunday morning at 8 a.m. Car and truck drivers could take the R22 without having to follow an additional diversion.

Open for cyclists at the end of March

Two large cranes have put the two bridge sections in the right place. “The installation is a complex operation,” says Marijn Struyf, spokesperson for De Werkvennootschap, the agency that is carrying out the work, in a report by BRUZZ. “The cranes used must not damage the road surface and the bridge decks weigh up to 80 tons each. It is a real feat to get them in place, but our technicians managed it properly.”

The last two parts of the bridge will be installed next weekend. Then the R22 outer ring will be closed to traffic. Afterward, asphalting works and lighting have to be installed. From the end of March to the beginning of April, the first cyclists should be able to use the bridge.