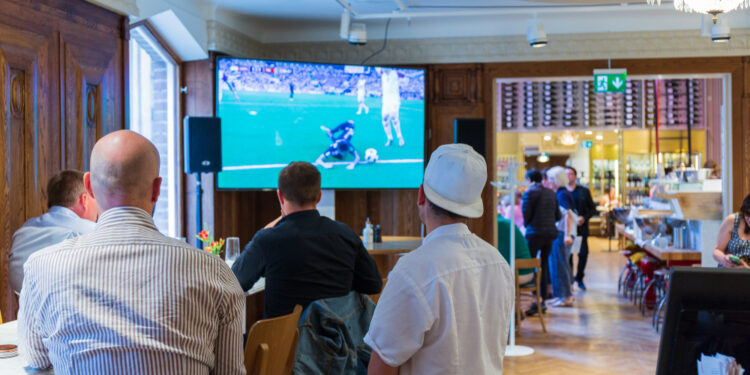 Brussels, (Brussels Morning)- From now on, broadcasting a football match of the Jupiler Pro League will cost cafe owners a lot more. On top of the fixed subscription with Eleven Sports, up to 1,800 euros can be added in so-called operating costs. A few Brussels café bosses fell from the sky, but the sports channel is fighting back. “This is common abroad.” This weekend fifty ‘agents’ from an external company will visit various cafes in Belgium to inform the owners about this, says BRUZZ.

The domestic football league started on July 22. Café bosses who want to broadcast the matches of the Pro League must from now on pay a licence fee to Eleven Sports, the sports channel that bought the rights two years ago. The compensation ranges from 69.95 euros per month for smaller cafes (less than 30 square metres) to 99.95 euros for medium-sized cafes (30 to 100 square metres) and 149.95 euros per month for larger businesses (from 100 square metres). ). For the latter, the annual cost therefore rises to 1,800 euros. This is in addition to the fixed subscription cost of 170 euros per year.

Eleven Sports itself sent out a press release on July 15, a week before the start of the competition, to announce the changed costs, but that did not reach all café owners. “We were in contact with the catering federations when the project was launched. They were committed to communicating with their members,” says Jan Mosselmans, head of content at Eleven.

The Brussels catering federation was not yet available to inform whether and how exactly they did this, despite repeated requests. In any case, the information has not reached all café owners. “I wasn’t aware yet,” responds the manager of Les Brasseurs. “I happened to hear about it through my neighbour,” says Jens Wouters of café Merlo. “It has stayed very well under the radar.”

Eleven Sports defends that the compensation was already agreed two years ago. “Two years ago we went for all the rights of the Pro League, including those to the commercial exploitation of the matches in bars and cafes,” says Jan Mosselmans. “Due to covid, we put that project on hold for two years because the pressure on catering businesses was great at the time, but we are now launching it. In our neighbouring countries, bars and cafes have been paying for broadcasting the domestic competition for years. So it is legal.”

Mosselmans says that the rates are calculated in advance in proportion to the expected profit for cafes. “Research has shown that more and more people are watching football together in a café. We have benchmarked whether the costs are in proportion to what one can get out of it, and we think so.”

“Of course we can get that out of it, but I don’t want to reason like that,” says Jens Wouters van Merlo. “You lose anyway. You end up with less every month and that’s a shame, because you want more than just getting ‘something’ out of it.”

At cafe Au Duc de Brabant in Molenbeek, manager Arif Kinali laughs at the prices. “My customers come here to have a drink. Football is just a present from the cafe. I’m not going to pay more than 1,000 euros a year for that,” he says. Kinali does not yet have a subscription to Eleven Sports, but was planning to. “I’ll leave it at that price,” he says.

Eleven Sports wants to convince the cafes that there are also benefits associated with the new licence. “We are trying to create a win-win situation where cafe owners can use our app to announce promotions or events,” says Mosselmans. A café that will broadcast a match on a big screen will then have a dot on the digital map of Eleven Sports. “And we offer other promotional material to highlight such an event,” says Mosselmans.

This weekend, fifty ‘agents’ from an external company will visit various cafes in Belgium to inform the cafe owners about this, he says. “They will help the bar and café owners to make maximum use of what is currently on the table.” To be clear, the agents are not inspectors. There will be a separate control body for that, it sounds like.

A transition period applies until 31 August. From September, the fee is effectively charged via invoices with telecom operators such as Proximus of Telenet. “They also normally communicated the new rates with their customers,” says Mosselmans. “Cafes that say they don’t know anything about it, that’s a bit weird.”