Bouglione does not store circus tent yet: ‘That De Croo will come and break them down himself’ 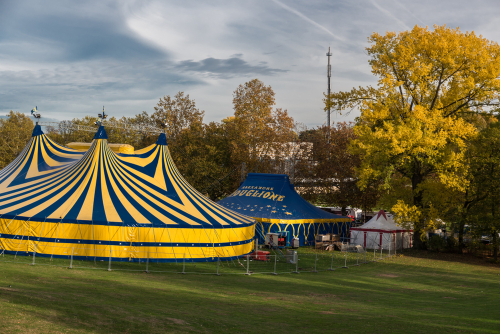 Laeken, Brussels / Belgium - 11 06 2018: View over the tents of the Circus Alexandre Bouglione in the Osseghempark

Brussels (Brussels Morning) Circus Bouglione has been back in Brussels since last week. The tenth edition of the Brussels Christmas Circus started on Saturday at Place Flagey in Ixelles. Although it was planned until January 9, the circus should have stopped after one day, because the new restrictive measures announced by the Consultation Committee last Wednesday also apply to the circuses.

In the BRUZZ studio, circus leader Alexandre Bouglione announced last week that the circus would remain open, by also serving food and converting the circus into a “restaurant circus”. After all, restaurants are allowed to remain open.

But the manager of Circus Bouglione does not consider breaking down the tent. The performances will continue as planned. Two hundred people are allowed in per performance, wearing a mouth mask and showing the Covid Safe Ticket (CST).

“What else can we do to keep it safe? Should we force people to wear astronaut suits? All of our artists are also vaccinated,” says Bouglione. “If people are vaccinated and are no longer allowed to go to cultural events, the message is actually that the vaccine is not good. Is that what one wants?”

“Apparently there are three or four places where you cannot get infected with the coronavirus. Perhaps I should have made the tent look more like a tram, because in public transport there are no problems with overcrowded trams, and the CST is not asked there,” continues Bouglione.

Last weekend, several mayors announced that they would not maintain the closure of the cultural sector. Christos Doulkeridis (Ecolo), mayor of Ixelles, also said he will not send the police. “He was still in our tent yesterday. Many mayors support us. At such moments, we also see a lot of qualities and understanding in some people,” said Bouglione.

Brussels Prime Minister Rudi Vervoort (PS) emphasized “that mayors are obliged to comply with the decree and to enforce the law”. “The police can come and get me and put me in jail immediately,” says the French circus leader. “There are countries where people are handcuffed if they don’t go to work. Here’s the reverse going on. Ça devient fou.”

As long as the police don’t come to Place Flagey, the shows will continue. Bouglione says he had artists come from all over the world, people who have been out of work for two years. After four days, he just can’t just send them home. The artists also helped him set up the tent, because he no longer had staff for that. “If we have to stop, De Croo should come and dismantle the tent himself.”

Tags: Alexandre BouglioneCircus Bouglione has been back in Brussels since last week