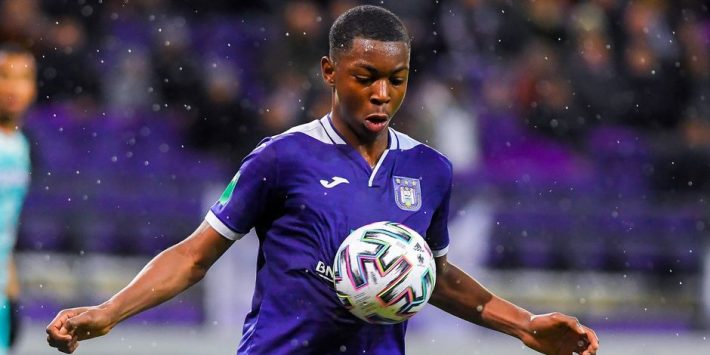 Kana was born in Kinshasa, but when he was four his parents came to Brussels.

Brussels (Brussels Morning) Kana was born in Kinshasa, but when he was four his parents came to Brussels. The family settled in Ganshoren and, with the exception of a short stopover in Jette, he spent his childhood there. He learned to play football on the squares in the neighbourhood. And you can see that in him. Just as he immediately removes the square players: “You can see that in the technique, but also in the mentality. I’ve been playing on those squares since I was six, and you can see that in my game”, he says in an interview with BRUZZ.

Kana is a product of the Anderlecht Academy in Neerpede, which he attended since he was seven. The club’s illustrious past made an impression.

“There was a portrait of Radzinski there. And next to it the scores of Anderlecht’s campaigns in the Champions League against Milan and Manchester United. I didn’t believe that,” Kana recalls. “I asked my father who that player was. He then told me who Tomasz Radzinski is.”

Shortly after joining the Academy, Kana got his nickname from Jean Kindermans, the person in charge of the youth academy. In the changing rooms, Kana is then called ‘Colonel Hathi’, after the leader of the elephants from ‘Jungle Book’, because he is so straightforward in everything. Straightforward and motivated. Also when it comes to studying, which is considered very important at the Anderlecht Academy. Kana is sent to Dutch-speaking education in Brussels. Today he is perfectly bilingual. Also thanks to his parents.

Today, Kana’s name is on his T-shirt. The first season he played 15 games as a defender. Most on the side of then player-trainer Vincent Kompany. At Anderlecht he was placed centrally at the back. “On the field, that didn’t do much for me. I spoke to Kompany like I spoke to any other player. But after the match, when I was driving home or lying in my bed, it would get in my head. Wow, what did I say to Vincent Kompany?”

Kana is working on a very good campaign with the promise team of the Red Devils. It earned him a ‘Keep Going’ from national coach Roberto Martinez.

He has been playing less in recent months. Yet he has grown. He owes this to the framework in his youth. “It went so fast for me in the beginning. But those twenty thousand people in the stands were not there for my experience. Twice eleven men, a ball and want to win. That was my world. The expectations of those spectators did not matter then.” He was sixteen then. He is now nineteen, a football adult in his own words. “You feel much less

outside pressure. The pressure you put on yourself is much worse.”

“Actually, I have an easier time at university than during my secondary education. I follow a separate process, which means that I have to process less material and material”

He definitely feels it now. “I’ve hardly ever been injured, I’m match fit,” he says. “Such a long time without playing football, that made it a bit more difficult for me mentally.”