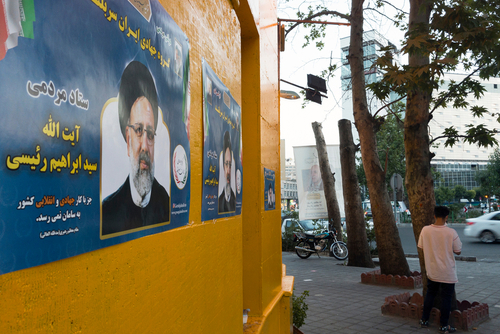 Tehran, Iran - June 17, 2021: Ebrahim Raisi Poster on a wall on a street in Tehran. He is one of the presidential candidates of the current election in Iran.

Belgium, (Brussels Morning Newspaper) The dual threats of Iranian terrorism and hostage-taking have grown more severe since the appointment of Ebrahim Raisi as president of the Islamic Republic. It is vitally important to acknowledge the past year’s upward trend in Tehran’s malign activities since the starting point of that trend was already deeply alarming. In 2018 alone, the Iranian regime ordered at least two large-scale terrorist attacks in Europe, not to mention other attacks targeting individual activists or small groups.

Fortunately, the planned deployments of a truck bomb in Albania and a hand-delivered explosive device in France were thwarted by the efforts of local law enforcement and Western counterintelligence. But the international community cannot rely on these countermeasures indefinitely. Actions must be taken soon to prevent the further proliferation of terrorist threats and to hold the regime and its officials accountable for those it has already attempted to carry out, whether successfully or not.

It must be acknowledged that Western governments have a long history of ill-advised efforts to manage those threats by making back-alley deals with the Islamic Republic and professing expectations that the regime would curtail its own malign behavior under the right circumstances. This strategy has never paid off, yet it appears deeply entrenched in Western political thought.

Critics of the Iranian regime entertained some hope that European governments had reached the limits of their patience with the Iranian terrorist state after the revelation of the plot to bomb an Iranian expatriate gathering on French soil. But more recent developments have undermined that optimism and injected a newfound sense of urgency into criticisms of longstanding Western policies.

The June 2018 Free Iran World Summit was attended by tens of thousands of ethnic Iranians from throughout the world, as well as dozens of hundreds of political dignitaries from diverse backgrounds. As part of an effort to kill the Iranian Resistance leader Maryam Rajavi, the regime targeted that event with a device comprised of more than 500 grams of the high explosive TATP.

Had it arrived at its destination and been detonated as planned, the bomb would have almost certainly killed hundreds of attendees, and possibly thousands, including any number of the American and European lawmakers who were seated close to the stage where Mrs. Rajavi was to give her speech. Instead, authorities in Belgium arrested the Iranian-Belgian couple who were tasked with carrying the bomb, which was safely disposed of.

One day later, German authorities arrested the mastermind of that plot, a diplomat named Assadollah Assadi who had been serving as the third counselor at the Iranian embassy in Vienna at the time. An ensuing investigation confirmed that Assadi had personally smuggled the TATP into Europe on a commercial flight before handing it off to his co-conspirators. It was also clearly established that none of the operatives in question had been acting on their own accord but had received their orders from high within the Iranian regime.

Iranian dissidents and activists were no doubt concerned that Assadi would be released in spite of all of this. Other governments have set Iranian terrorists and assassins free in the past, either on the basis of political considerations or under pressure to swap those violent criminals for Western nationals arrested on false pretenses in the Islamic Republic. Thus, it was with a sense of relief that the regime’s opponents watched as Belgium kept Assadi in detention throughout the investigation, placed him on trial, secured a guilty verdict, and sentenced him last year to the maximum 20 years for conspiracy to commit terrorist murder.

For once, it seemed as if a major European power – a court in the capital of the European Union, no less – would actually be holding an Iranian state operative accountable for political violence. Sadly, this perception proved to be short-lived, as it was revealed in June that the Belgian government had quietly negotiated a treaty with Iran that would set the stage for Assadi to be released.

That treaty was evidently motivated at least in part by Iran’s arrest of a Belgian aid worker, signaling that Western strategy had not, in fact, changed in terms of rewarding Iran for its hostage-taking. Making matters worse, that hostage-taking has clearly accelerated in recent years and especially since President Raisi took office. The list of known detainees now includes citizens and permanent residents of the United States, Canada, Britain, France, Germany, Austria, and Sweden – and these is just those whose cases have been publicly revealed.

Olivier Vandecasteele, the Belgian hostage who is likely to be traded for Assadi, was held for months without public acknowledgment by either Tehran or Brussels, while presumably being used as a bargaining chip throughout negotiations for the “transfer of sentenced persons.” Other hostages are sure to be used in a similar fashion to secure the release of persons responsible for other heinous actions, ranging from massive plots like that which targeted the Albanian headquarters of the People’s Mojahedin Organization of Iran in July, all the way down to individual attacks like that which grievously wounded the author Salman Rushdie in August.

These and other incidents go to show that Assadi’s arrest and prosecution had no apparent impact on the regime’s commitment to using terrorism as a form of statecraft and international intimidation. One can only imagine what the regime would get up to in the months and years to come if the architect of one of its largest terrorist plots were set free after serving only four years of his 20-year sentence.

With that in mind, the international community must recognize that it is time to take a firm stand and demand serious accountability not just from individual Iranian operatives but from the regime as a whole. Of course, the first step in that direction involves actually following through on existing demands for lower-level accountability. Thus the Belgian government must halt its plans to release Assadollah Assadi and must instead commit to alternative strategies for securing its own citizen’s release, involving serious economic and diplomatic pressure on Tehran.

Furthermore, since the underlying issues affect the entire Western world, all of Europe must join in exerting this pressure, thereby sending a strong, unified message that Tehran’s impunity is at an end, and neither terrorism nor hostage-taking will be tolerated anymore.