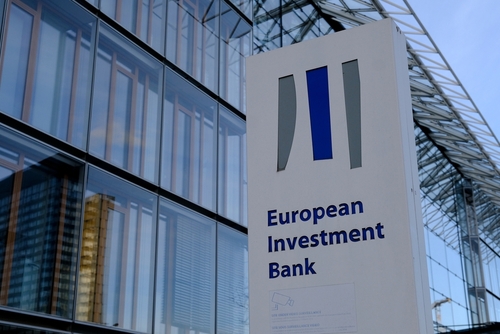 Exterior view of headquarters of of the European Investment Bank (EIB) in Luxembourg on April 7, 2022.

Belgium, (Brussels Morning Newspaper) The European Investment Bank (EIB) is to present its Ukraine rebuilding plan later today, according to an internal document.

The bank is proposing to use a funding structure similar to that used in the coronavirus crisis to direct up to 100 billion euros towards rebuilding efforts, Reuters reports.

The EIB wants to launch the EU-Ukraine Gateway Trust Fund (E-U GTF) with initial contributions of 20 billion euros from EU member states and a budget in the form of loans, grants, and guarantees.

According to EIB, this initial investment would lead to infrastructure projects worth up to 100 billion euros and cover approximately half of Ukraine’s immediate needs.

The EIB is to present the proposal later today, at the opening of the Ukraine Recovery Conference in Switzerland focused on plans to help Ukraine rebuild after the war.

According to the plan, EIB wants to set up a fund like the one used in the coronavirus crisis to provide financing to small and medium-sized enterprises which should result in mobilization of up to 200 billion euros.

The EU lending arm pointed out that the E-U GTF could help to rebuild bridges as well as water and wastewater management infrastructure, especially in parts of Ukraine where the population increased due to displacement caused by the war.

The scheme could also help Ukraine to revive its digital and energy infrastructure as well as facilitate export, with the EIB and development banks to disburse the money and oversee investments.

According to the plan, the money will incentivize the private sector, with the EIB pointing out that the sector would otherwise likely avoid investment financing as too risky.

It added that the scheme is similar to the one implemented in the coronavirus crisis, stressing that this means it can be deployed quickly and predicting that first investments will be approved by the end of this year.

The scheme would also allow contributions from third parties and be scaled up.

The EC still has to approve the plan as do EU member states, after which each bloc member would decide whether to contribute to the rebuilding fund.