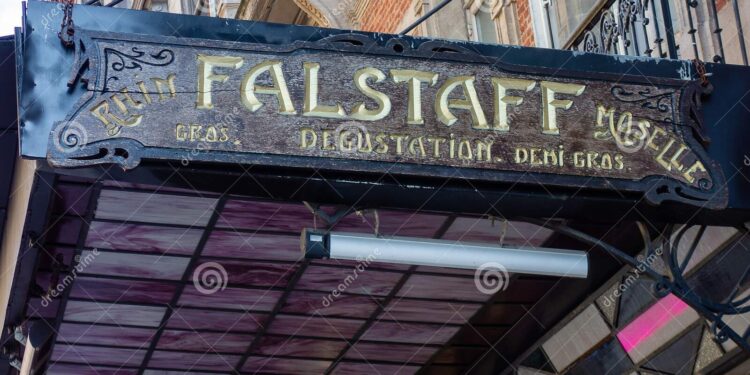 Brussels, (Brussels Morning)- On Wednesday evening, hooligans wreaked havoc of thousands of euros in the Falstaff in about one minute. A sad day for the famous Brussels brasserie, but also for all art nouveau lovers. “It could take months before everything is restored,” says Werner Adriaenssens, professor of History of the Decorative Arts (VUB) and curator of 20th century Collections (Museum Art & History).

As an art historian, how do you view what happened on Wednesday evening?

Unfortunately, we have noticed in recent years that the threshold for damaging or destroying buildings with an (art)historical value is becoming lower and lower. Wednesday we saw how brutal violence caused enormous havoc. But it also happens that colonial monuments are defaced for politically correct reasons. Or that climate activists are glued to museums. In other words, there’s no getting around the fact that there’s a blurring of boundaries, he said to the BRUZZ reporter.

The left window of the Falstaff on the street side was badly damaged. Can we assume that this window was authentic?

I assume that. Typical for Art Nouveau are the stained glass windows and circular motifs that recur in the wooden chassis. You saw this decorative aspect in many restaurants and cafes in the 19th century. It met the needs of the growing middle class. They loved eating out and were open to a new style and look.

Can that broken window be repaired?

Which can. We still have a number of professionals in Belgium who have the expertise to make windows according to Art Nouveau principles. Only, those highly specialised people are rare and have a lot of assignments. This means that it can take months before what was destroyed in one minute can be restored.

Because the Falstaff is a listed building, the repair work will have to meet strict criteria. This will be followed by urban.brussels (formerly Brussels Urbanism & Heritage). They ensure that the correct type of material, such as wood and metal, is used. These procedures also take time.

Art Nouveau originated in Brussels. How do you explain that?

Brussels was indeed the cradle of Art Nouveau. Much has to do with the wealth that was present in Brussels in the 19th century. In addition to the nobility, a wealthy middle class emerged. They were often industrialists who had factories in Flanders or Wallonia, but who lived in Brussels. They had an urge for innovation and gave substance to this, among other things, with new architecture and contemporary design. It was a way of distinguishing oneself from the old rich or the nobility.

The first Art Nouveau house was built in Brussels in 1893. It is located in the Paul-Emile Jansonstraat, a side street of Avenue Louise. Victor Horta built it for a wealthy engineer. New for that time was the use of industrial materials (iron, glass) in a home. It is interesting to see how Art Nouveau subsequently spread to other countries (France, Germany, Spain, Italy, …).

What is the difference between Art Nouveau and Art Deco?

Art Déco arose during the interwar period. It is an art movement that reached its peak in Paris in 1925. Actually as a reaction to Art Nouveau. That style did not catch on very well in France. The French thought the new art trend was just a bit too innovative. They therefore went for a variant that was popular with the French and became a success there.

You are specialised in Art Nouveau and Art Deco. What appeals to you about these art movements?

It’s not so much the style that attracts me. The historical story behind it. They are styles that are an externalisation of a time when a social revolution was taking place. You get a new society in which the new rich are an important driving factor and a broad middle class is created.

Which Art Nouveau pearls do you find more than worth the effort?

Recently I wrote an article about Léon Sneyers. An Art Nouveau architect who created unique homes. Such as the La Marjolaine shop at 7 Magdalena Steenweg near the Grote Markt. Or the Huis Cortvriendt in Nancystraat 6-8 in the Marolles.

Maintaining Art Nouveau buildings costs a lot of money. Why is it important that we continue to invest in it?

You are undoubtedly familiar with the phrase: whoever does not know his past has no future. I fully support that thought. It is crucial that we cherish our city’s past. And that we make buildings with historical value attractive not only for governments, but also for citizens and investors. That way they get a new life. And they continue to give our city a unique appearance.