Animal welfare report: all about farmers, nothing about animals 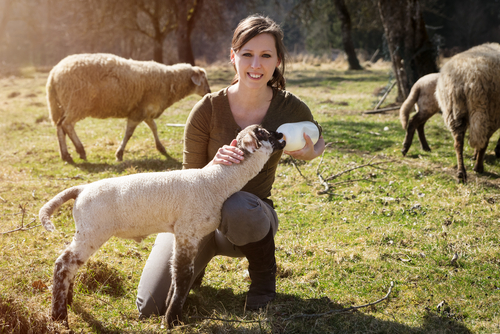 Woman is feeding a lamb with bottle of milk, concept animal welfare and rearing

Current animal welfare legislation, for the most part, is outdated. The basic regulation that covers all species dates back to 1998. It was subsequently augmented over the years with directives for specific animals. Overall, existing legislation is vague and inconsistently applied and/or monitored across the Member States.

It is therefore a matter of deep regret to me that this unambitious and inaccurate resolution found a majority (496 votes in favour, 140 against, with 51 abstentions) and was approved. As shadow rapporteur for this file on behalf of the Greens/EFA, but also as a concerned citizen, I recognise that approval of the resolution represents a lost opportunity for the EP to stand up for animal welfare and send a strong, science-based opinion to the Commission, ahead of this legislative review.

This report does not factually represent the reality experienced by animals subject to intensive farming, or the problems arising from implementation of the legislation. Instead, it focuses on protecting the current unsustainable intensive model of animal production.  What was meant to be a report on animal welfare and how we have failed to protect them, has ended up as a report on the competitiveness of the sector and the economic consequences of investing in much-needed improved animal welfare standards.

To better explain my opinion and illustrate the unscientific, erroneous and absurd nature of this report, just look at the statement on foie gras. The report argues that the production of foie gras respects animal welfare. How is it possible to state that force-feeding animals by pushing tubes down their throats to pump in undesired amounts of feed are “procedures that respect animal welfare” and “their biological parameters”?

The report also distorts reality when it considers that the widespread violations of animal welfare norms are merely “anecdotal cases that receive too much attention”. Any non-compliance with animal welfare legislation demands our complete attention and needs to be taken very seriously in order to determine responsibilities and apply appropriate sanctions. To dismiss all too frequent non-compliance with the relevant legislation as sporadic occurences is an outright lie. Pig-tail docking is an issue that even the Commission recognises. The practice has been prohibited for 20 years, yet so far only two Member States have actually taken steps to ban it. Over the years, NGO undercover investigations have (thankfully) exposed numerous cases across the EU, many relating to multinational companies that have wrongly gained consumers’ trust.

Again on pig welfare, the report argues that no viable solution has yet been found for the routine practice of tail docking. When the lead MEP responsible for this file, Jérémy Decerle, a French farmer from Renew Europe, wrote “viable solution” he certainly meant “profitable solution”.

This is a problem the Greens/EFA face many times in Parliament when trying to advocate for improved animal protection. MEPs want to maintain unsustainable conditions in which animals are allowed to be kept currently because doing so is more profitable. Meanwhile, to talk about reducing the number of animals per farm is a completely taboo subject. This is not rocket-science. If you want animals to be well and healthy, they need to be properly cared for. This care should begin by recognising that keeping animals in an unnatural, stimulus-deprived and stressful environment, as happens with intensive farming, will not prevent them from biting each other’s tails and exhibiting aggressive behaviour.

Another red-line issue in the report for the Greens/EFA concerns labelling. The Commission has announced that it will propose an animal-welfare labelling scheme for food products, in an attempt to nudge consumers into making the right choices and to better transmit value through the food chain. The report maintains that such labelling should be voluntary, and not mandatory. For us, a mandatory system is the way to ensure a level-playing field for all farmers across the industry, and to reward (by consumer preference) those that opt to go beyond the basic welfare standards.

The introduction of egg-labelling in 2008 is a good example of the effectiveness of a mandatory scheme. Following its introduction, the number of egg-laying hens kept in alternative, non-cage systems steadily increased in the EU, proving the positive impact of a higher level of transparency.

These are only some of the issues that led the Greens/EFA to vote against the report. Regrettably absent is any reference to the urgent need to counter the intensification of animal production by reducing the number of animals per farm and meat consumption levels.

On a positive note, the report did end up reiterating the EP’s call that the “voluntary coupled support subsidies” from the Common Agricultural Policy (CAP) not be used to raise cattle for bullfighting (346 in favour, 271 against and 77 abstentions).  This proved to be the only amendment that the Greens/EFA tabled that was passed.

Along with our tabled amendments, an alternative resolution was also put to the vote, which essentially was a replica of the Environment Committee’s proposal on the same topic. This text was supported by the Greens/ALE because it more faithfully represented the problems of implementing animal welfare legislation. Sadly, however, it failed to gain a consensus (182 in favour, 496 against, 21 abstentions).

The resolution on the implementation of on-farm animal welfare could have set an ambitious tone for the Commission’s animal welfare legislative review. However, having been shaped initially by the always conservative Agriculture Committee, we now have a text that completely misses the point, ignores citizens’ opinions, and embarrassingly contradicts the aspirations set forth in the Farm to Fork Strategy. We must now place our trust in the European Commission, hoping that when it comes to the eventual legislative proposal, it will place science and animal welfare first.