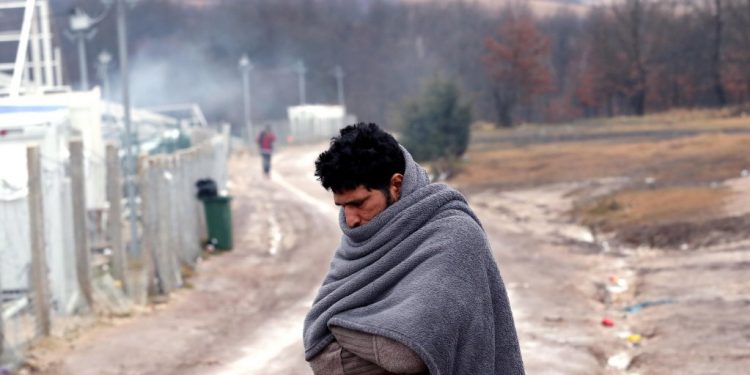 Brussels (Brussels Morning) The Kara Tepe refugee camp on the Greek island of Lesbos is ill-suited for winter conditions, and has been hard hit by rapidly falling temperatures, while aid agencies sound the alarm over the worsening conditions, Deutsche Welle reported on Tuesday.

Camp residents are using Instagram and a separate online platform to share their plight with the outside world, since the authorities have barred photographers and TV crews from accessing the camp.

An image of two tents burning appeared recently on Instagram, showing two women calling for help amidst billowing smoke. “Yet another fire at the second Moria camp on Lesbos”, the description read. “This is not the first time, it won’t be the last. This is because the government does not care about refugees”.

Last week, as a sudden drop in temperature hit Greece, hail and snow descended on Lesbos, prompting the UNHCR to issue an appeal for help, with a warning that the thousands of refugees living in tents are facing “freezing temperatures and icy wind in precarious conditions”.

Kara Tepe was constructed after a fire destroyed most of the Moria camp in September 2020. It is surrounded by barbed wire fencing and under constant surveillance. Currently, it houses some 7,000 out of 15,000 displaced people living in makeshift camps on Greek islands.

The residents are no longer allowed to cook for themselves, after the September fire, with the military serving them daily meals. A strict lockdown is in place, ostensibly to prevent the spread of coronavirus. More than one third of the camp’s residents are minors.

The camp already suffered flooding in December, and Caritas International warned that the camp facilities are inadequate for its residents, citing lack of toilets and no reliable supply of food and water.

Further warnings came last week, as Human Rights Watch published a report revealing that parts of the camp had been built on ground contaminated with lead, and accusing the Greek government of ignoring the issue and attempting to downplay the dangers.

The EC has recently increased its funding to 30 million euro to fly the refugee families to other countries willing to receive them, including Germany, France, Belgium, Bulgaria, Croatia, Finland, Ireland, Portugal Slovenia, the Netherlands, Norway and Sweden. But the transport is slow, and many children and adults continue to live in dangerous, unsanitary conditions.