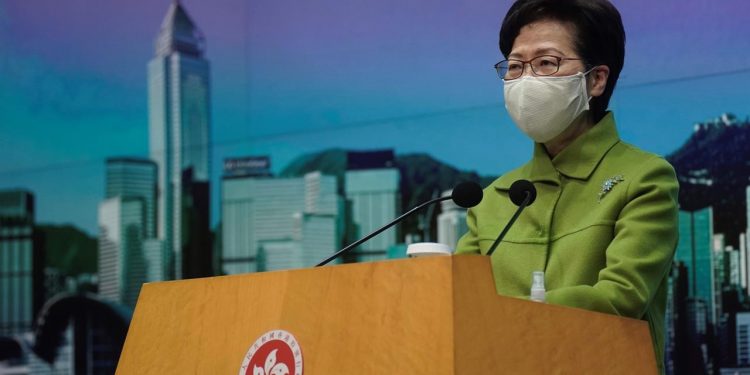 Brussels (Brussels Morning) Hong Kong Chief Executive Carrie Lam voiced her backing for the controversial package of electoral reforms that most likely would further erode democracy in the semi-autonomous, special administrative region of China, and cement Beijing’s control over its administration, AFP reported.

“I can understand that the central authorities are very concerned”, Lam told at a regular news briefing on Tuesday. “They do not want the situation to deteriorate further in such a way that ‘one country, two systems’ cannot be implemented.”

The electoral reform is likely to take the form of redistribution of votes in the 1,200-member electoral commission that selects Hong Kong’s chief executive, already subject to a veto from Beijing.

Relations with the EU

The commission members ostensibly represent Hong Kong’s various economic, social and educational sectors, but are de facto under strict control from Beijing. The only independent votes come from the 117 district councils, and it is expected the reform will transfer these votes to one of the other blocs.

Following China’s imposition of a restrictive national security law on the city last year, most of the opposition legislators in the city’s Legislative Council were expelled for “insufficient loyalty”, while veteran opposition leaders were arrested and charged with illegal assembly and collusion with hostile forces.

The latest developments in Hong Kong are likely to complicate Chinese relations with the EU, as the Foreign Affairs Council (FAC) reached a decision on Monday to increase support for civil society in the city and coordinate its response to the deteriorating situation with like-minded partners.

The FAC also prepared further steps in anticipation of the electoral reform, though it did not make them public. Answering press questions on Monday, High Representative Josep Borrell defended the bloc’s investment agreement with China despite the country’s human rights record.

Borrell noted that under the terms of the agreement China had to accept ambitious provisions on sustainable development, commitments on forced labour and ratification of the International Labour Organisation convention, all of which, he maintained, made for positive change.

“And to sign this agreement does not prevent us from continuing addressing with China our concerns on human rights and fundamental freedoms, be it in Hong Kong, in Xinjiang, or elsewhere”, Borrell added.