Yemen at the brink, again 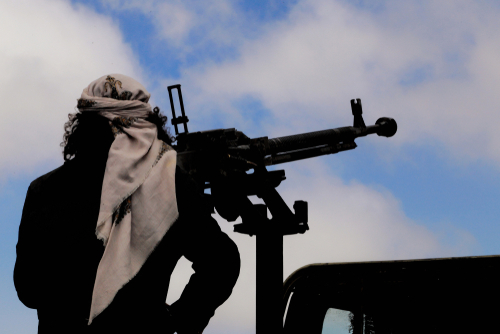 Yemeni soldier shoots Houthi militias, south of Yemen in the city of Taiz

Paris (Brussels Morning) As clashes intensify within the last government stronghold of Marib in Yemen and fears rise of massive displacement in what is already the world’s worst humanitarian crisis. International humanitarian organisations and the UN repeat their warning that the beleaguered country is heading to an unprecedented famine.

In the meantime, UN-led efforts to bring humanitarian assistance to the Yemeni people was let down by lukewarm donations, while the UK underwent broad cuts to humanitarian expenditure. As western governments come under intense criticism for their double-standards over Yemen, the change of direction of the Biden administration allows room for hope albeit concrete urgent action is deemed necessary to avoid a looming tragedy.

The UN has repeatedly warned the fighting around Marib could lead to the war’s largest displacement so far — thousands of internally displaced persons (IDPs) have found refuge in the region since 2015. In its latest update, the UN office for the Coordination of Humanitarian Affairs (OCHA) notes that across Yemen 16 million people will face hunger this year, and nearly 50,000 are already starving to death in famine-like conditions. While malnutrition rates are at record highs, 400,000 children could be in their last weeks and months without urgent treatment.

At the UN high-level pledging event on 1 March, attended by more than 100 representatives of member states, donors, international organisations, NGOs and civil society, the UN called for 3.85 billion dollars to face the dire needs of Yemenis. However, only 1.7 billion dollars were pledged, an outcome the UN described as disappointing. UN Secretary General Antonio Guterres said that cutting aid is a “death sentence”.

“The best that can be said about today is that it represents a down payment. I thank those who did pledge generously, and I ask others to consider again what they can do to help stave off the worst famine the world has seen in decades”.

Mark Lowcock, UN coordinator for humanitarian affairs, warned that time is running out in Yemen and called for an aid operation that “will prevent the spread of famine and create the conditions for lasting peace”.

Since early February fighting has intensified around the Marib governorate, east of Yemen’s capital Sanaa, and in the Taiz region. The Houthi rebels are pushing towards oil-rich Marib with the aim of laying a siege against the country’s embattled government and President Abdrabbu Mansour Hadi, backed by the Saudi-led military intervention since 2015.

The Houthis have stepped up their offensive on Marib while also launching drone and missile attacks against Saudi oil facilities near the border with Yemen as well as in Riyadh and Jeddah. Beginning March, Saudi Arabia retaliated with airstrikes against the Yemeni capital Sanaa.

Marib is the last government-controlled region and its loss would be disastrous for the leadership. Observers maintain that the Houthis, who now control most of the country’s north, seek to gain control of Marib as leverage before entering into any UN-promoted peace negotiations with the government, France24 reported.

US support for a solution

As renewed efforts by the UN are supported by the Biden administration, the question of weapons supplies to the Saudi-led coalition take centre-stage again, all the more as western countries come under severe criticism over continued arms sales.

On the occasion of the G20 2020 summit, Oxfam said that G20 members had supplied weapons worth more than 17 billion dollars to the Saudis but their humanitarian contribution to the ravaged country was only about a third of this amount.

President Biden has made finding a solution in Yemen a top foreign policy priority. The administration announced a freeze to arms exports to Saudi Arabia and the UAE and the end of its support to the Saudi operations in the country, albeit without specifying to what extent that would be implemented.

It also removed the Houthis from its list of terrorist organisations, reversing a decision by former US president Donald Trump, in order to allow for unimpeded humanitarian access and to pave the way to restart talks. But a lot more is needed to secure an exit from the chaos, agree a peace deal, reconstruct the devastated country and organise free elections. For Brookings Institute senior fellow Bruce Riedel, “the sad reality of Yemen today is that it is broken beyond retrieval” and its territorial integrity and unity is probably “irretrievable”.

When the Obama administration was faced with the Saudi determination to launch a military intervention in Yemen in 2015, it opted to provide logistical, intelligence and diplomatic support in the hope of maintaining some control on the Saudi ambition to rid the country of the perceived and widely exaggerated Iranian influence there.

“We knew we might be getting into a car with a drunk driver”, a US official told Foreign Affairs. Weapons continued to flow to support the increasingly reckless Saudi operations under the Trump presidency but the situation on the ground became even more complicated. Conflicting interests among the coalition allies, namely Saudi Arabia and the UAE, led to the fragmentation of the Sunni political camp backing Hadi, as the Houthis made territorial gains and launched attacks on oil facilities and installations on Saudi soil causing costly damage.

The blockade of Yemen’s airspace, borders and ports imposed by the Saudis deprived hundreds of thousands of Yemenis from access to basic goods and medication, while hospitals, factories and schools were bombed indiscriminately. According to the Yemen Data Project, a third of the 23,000 air raids since March 2015 were conducted on non-military targets, while much of these weapons came from the same countries that cut down their humanitarian support to Yemenis.

UK halves aid ‘on the back of Yemen’s starving people’

The UK government has recently halved its contribution to humanitarian aid in Yemen from 164 million pounds it allocated last year. Lowcock, who previously served as permanent secretary at the UK’s Department for International Development (DfID) said he was shocked by the cuts that would bring direct harm and large-scale loss of life:

“The decision, in other words, to balance the books on the backs of the starving people of Yemen, has consequences not just for Yemenis now, but for the world in the long term”, the Guardian quoted Lowcock. On the other hand, the UK is one of the leading weapons suppliers of arms to Saudi Arabia with an estimated 1.88 billion pounds worth of arms between July and September 2020.

France is the third largest exporter of arms to Riyadh and second to the UAE, while Amnesty International and Human Rights Watch have called on the government to allow parliamentary scrutiny over the weapons sales. No change of course has been indicated by President Macron’s government.

Following the US announcement, Italy permanently blocked the sale of thousands of missiles and aircraft bombs to Saudi Arabia and the UAE at the end of January, acting on a previous suspension announced by the Foreign Minister, Luigi Di Maio, in July 2020.

But former Prime Minister Matteo Renzi’s presence in the kingdom for the “Davos in the Desert” investment forum in December caused controversy in Italy, as he praised MBS while saying that “Saudi could be a place for a new Renaissance for the future”.

Germany has put arms sales to a halt since 2019 and extended the ban for another year at the end of 2020, calling for a viable solution. Other countries who imposed restrictions on arms sales to Saudi Arabia include Belgium, Finland, Denmark and New Zealand, but countries such as Australia, Canada and Spain confirm they would not ban exports for now.