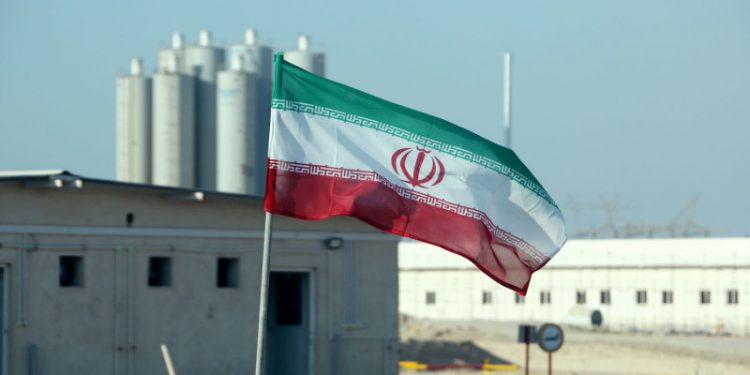 A picture taken on November 10, 2019, shows an Iranian flag in Iran's Bushehr nuclear power plant, during an official ceremony to kick-start works on a second reactor at the facility. - Bushehr is Iran's only nuclear power station and is currently running on imported fuel from Russia that is closely monitored by the UN's International Atomic Energy Agency. (Photo by ATTA KENARE / AFP) (Photo by ATTA KENARE/AFP via Getty Images)

Belgium (Brussels Morning Newspaper) Western signatories of the lapsed Iranian nuclear treaty – the US, Britain, France, and Germany – are reportedly pushing for the International Atomic Energy Agency to condemn Iran for refusing to answer longstanding questions on found uranium traces at sites which weren’t declared as nuclear facilities.

The push comes as the ongoing negotiations on reviving the so-called Joint Comprehensive Plan of Action (JCPOA) have apparently stalled, with diplomats from original treaty signatories meeting in Vienna for more than a year now are increasingly pessimistic that a workable solution can still be found.

IAEA rebuke of Iran would likely anger Tehran, which is why the four western powers have previously delayed submitting a draft resolution on the matter of uranium traces to the quarterly meetings of the IAEA Board of Governors, fearing such a move could jeopardize the ongoing negotiations.

However, IAEA informed its 35 member states this week that Tehran failed to offer any credible answers on the particles found at three undeclared sites, despite previously reaching an agreement with Iran in March that the two sides would try to resolve the open issue by this time.

In a draft resolution sent to IAEA member states, and seen by Reuters, the agency Board calls upon Iran “to act on an urgent basis to fulfil its legal obligations and take up immediately the Director General’s offer of further engagement to clarify and resolve all outstanding safeguards issues”. While the text was unsigned, two diplomatic sources claimed it was submitted by the US and the so-called E3 – the three European powers.

The original JCPOA was signed in 2015 between Iran on one side and all permanent UN Security Council members – the US, the UK, France, China and Russia, as well as Germany and the EU. The treaty provided Tehran with relief from international sanctions, while setting hard limits on the country’s nuclear programme, designed to prevent Iran from developing nuclear weapons.

After US President Donald Trump assumed office, he decided to pull the US out of the treaty and reimpose sanctions on Tehran, to which Iran responded by engaging in a series of increasing breaches of the treaty’s limitations.

While change in the Oval Office, with the election of President Joe Biden, heralded a possible revival of the treaty, the negotiations were soon hampered by government change in Tehran, as moderate President Hassan Rouhani was replaced by ultra-conservative hardline cleric Ebrahim Raisi. As the Vienna negotiations progressed, Tehran continued to engage in uranium enrichment above the limits set by the original treaty, leading to concerns among western nations that the new Iranian administration could be abusing the negotiation process simply to stall for time before developing nuclear weapon capability.
Iran’s regional rival Israel, which has opposed the JCPOA since its inception, has repeatedly warned that it would not allow Tehran to develop nuclear weapons, hinting at a possible military solution in the future. On Wednesday, the Israeli Defence Force engaged in a massive long-range air strike exercise involving dozens of aircraft.