Verstraete: ‘Widening the Ring does not eliminate traffic jams, but kilometre charges do’ 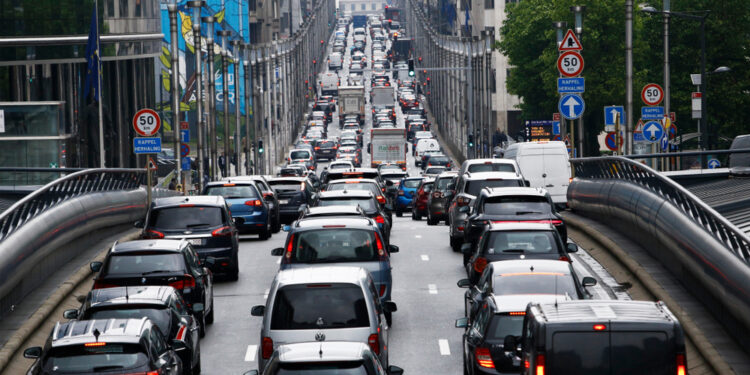 Brussels, (Brussels Morning)- The Flemish government has chosen a scenario for widening the Ring and calls on the Brussels government for constructive consultation. “Brussels has been asking for such a consultation for some time,” said MP Arnaud Verstraete (Green) to BRUZZ. “But we also want to tackle the cause of the traffic jams. This can be done via a kilometre charge, but the Flemish government does not even want to have it investigated.”

The press release that the cabinet of competent Flemish minister Lydia Peeters just sent out about the widening of the Ring – and the associated government decision of two weeks earlier – came out of the blue for the Brussels government on Friday.

“If there are new proposals, we will of course look at them,” said Marie Thibaut, the spokeswoman for Elke Van den Brandt (Groen), the Brussels minister of Mobility and Public Works. “The Brussels government already gave detailed advice on the current plans in July 2021. We are of course asking for more bicycle and tram connections to Brussels. However, we do not see an increase in the number of track sections on the Ring, since that extra car traffic will create and the situation will stall again in the long run.”

Like the Peeters cabinet, Thibaut confirms that Brussels and Flanders have agreed to resume their consultations after the summer recess.

“On the basis of scientific research and tests in other European cities, we can only systematically establish that more lanes lead to more traffic, more traffic jams and more air pollution,” said Arnaud Verstraete, member of the parliamentary mobility committee and party colleague of Minister Van den Brandt, who is on vacation.

“The Flemish government is dogmatically sticking to more lanes in its proposal, while this will yield the opposite of what they want, and what we want. New lanes attract more traffic. The study on which the Flemish government is basing itself will only run until 2030. , and is not investigating the long-term effects of the extra lanes.”

“We notice that there is a taboo on talking about how we can tackle the cause of the traffic jams,” says Verstraete. “Then we are talking about switching to other modes of transport, the ‘modal shift’, but also about a kilometre charge, which for the time being seems unmentionable in Flanders.”

“Peeters says that she wants constructive consultations with Brussels, but we have been asking for some time,” says Verstraete. “But then a real consultation, in which not only their proposals are discussed. An approach to the cause of the saturation of the Ring must be looked at. So far we have encountered a categorical refusal. Flanders does not even want to allow a kilometre charge. to research.”

“The one-way communication comes as a surprise,” says Verstraete. “I suspect that it is better that we consult than that both parties explain their positions in the media. So let the consultation continue, taking into account scientific research and an approach to the causes behind the traffic jams.”

Joris Poschet (CD&V), alderman in Jette, the municipality that houses part of the Ring on its territory, is also not happy with the Flemish plans. “Jette will be widening the Ring, a complete exit complex with more cars through our municipality, and a small ecoduct, while we asked for a longer roof,” he sums up on Twitter. “So that is 0 out of 3, and with the list of the Mayor in Jette we will oppose this.”

“If only it were that simple”, the citizen movement Heroes for Zero responds to De Werkvennootschap’s statement that a fourth lane on the Ring will remove cut-through traffic from residential areas. “An extra lane means extra ‘induced’ traffic anyway. The cut-through traffic will not magically evaporate from the neighbourhoods. So go with that Good Move (car-free neighbourhoods, ed.). Strong circulation plans will be needed to protect the Jetse residential areas from even more. more traffic.”