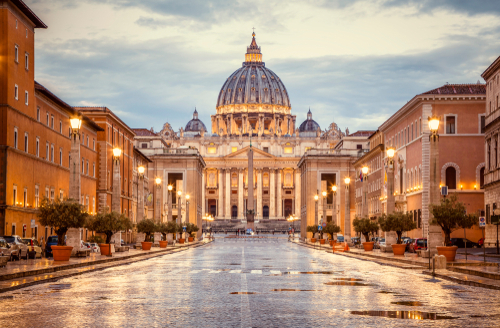 Brussels (Brussels Morning) Italian street artist Alessia Babrow is suing the Vatican for using a stylised image of Christ she glued on a bridge near the Holy See, which the Vatican City State’s telecommunications office decided to use as an image on its stamps, without either permission or an offer of compensation, AP reports.

“I couldn’t believe it”, Babrow told AP. “I honestly thought it was a joke. The real shock was that you don’t expect certain things from certain organisations”, she said. The artist was stunned when she discovered that the Vatican had used a reproduction of her image, a heart emblazoned across Christ’s chest, as its 2020 Easter postage stamp.

The image was originally produced by Babrow in early 2019, and the heart depicted across Christ’s chest is one that is a hallmark of many of her works. Babrow sued the Vatican telecommunications office, alleging it was both wrongfully profiting from her creativity, while also violating the original intent of her artwork.

According to the lawsuit, which demands close to 130,000 euro in damages to be paid to the artist, the Vatican did not offer any official response when contacted by Babrow to negotiate a settlement for the unauthorised use and sale of her art.

Vatican stamp office head Massimo Olivieri declined to comment on the lawsuit, despite having previously recanted the story of how the stamp came to be in remarks to the Italian press. He said he took a photo of the Christ after he saw it while riding his moped one day.

He wanted to use the image for the Easter stamp to appeal to a new generation of stamp enthusiasts. He admitted that he feared his superiors might object to using a graffiti-style stamp for Easter. “Instead, the acceptance was immediate and convinced”, Olivieri observed.