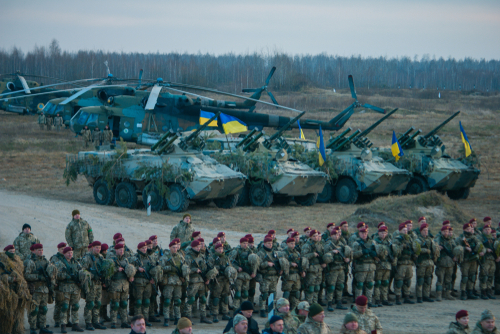 Brussels (Brussels Morning) The Ukrainian Defence Ministry announced on Monday that its military has held another drill involving airborne troops near the capital, Kiev, as the country’s western allies are increasingly concerned over the Russian buildup of troops near its borders.

In footage released by the Ministry, Ukrainian troops can be seen landing, supported by helicopters and fixed-wing aircraft. Official sources claim that the drills simulated the landing of airborne troops and armoured personnel carriers in an attack on an enemy target.

The latest drill comes as the US is warning that Moscow is preparing for an all-out invasion of Ukraine, which could take place early next year. Bloomberg reports that US intelligence shared with its European allies indicates Russia is already moving its troops into position.

The invasion plans reportedly envision assaulting a wide area of Ukraine, with simultaneous attacks launched from Russia, from the Russia-occupied Crimea peninsula, and from Belarus. Some 100 brigade-sized tactical groups are expected to participate, numbering around 100,000 troops in all.

The head of Ukrainian military intelligence Kyrylo Budanov told Military Times this weekend that around 92,000 troops are now in place, and that Ukraine’s forces will be ready for attack by end of January or early February.

US intelligence officials note that the final decision on whether to invade has not yet been reached by Russia’s President Vladimir Putin, and that it remains unclear whether it actually will be launched, or whether Putin aims to use the credible threat of an invasion to strengthen his hand in negotiations with the West.

Putin dismissed the idea of an invasion of Ukraine last week, but appeared pleased with the alarm the threat has raised in the West, taking it as evidence that his actions have drawn the attention of the US and its allies.