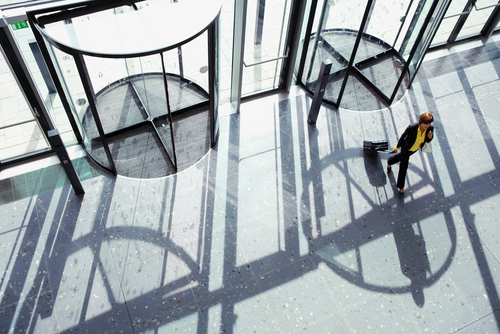 Overhead shot of a businesswoman walking through revolving door with a suitcase in her hand with copy space available.

European institutions should have an “exclusivity clause” that stops the “revolving door” phenomenon between people that serve EU institutions and big business, argues Sebrina Pignedoli.

Brussels (Brussels Morning) Corruption is the abuse of power for private gain. It enables organised crime and acts as a drag on economic growth, creating business uncertainty and imposing additional costs. The Treaty on the Functioning of the EU recognises corruption as a “euro-crime,” listing it among the particularly serious crimes with a cross-border dimension (TFEU Art. 83.1).

In the European Parliament, there are a number of parties that were born in the aftermath of the sovereign debt crisis in Southern Europe with an explicit message of renewal and anti-corruption campaigning. One of these parties was the Five Star Movement (M5S).

Brussels Morning talks about corruption with Sabrina Pignedoli MEP, who has a background in investigative journalism, including the expansion of the Ndrangheta, the Calabrian mafia. She is now a member of the committees on Budgetary Control (Cont), Legal Affairs (Juri), and Civil Liberties (Libe). In short, she is in position to act against corruption.  We ask her whether enough is being done to deal with corruption in Brussels.

Brussels Morning. A new EU ethics body is taking shape in the European Parliament, but it is unlikely to have the power to formulate binding decisions. During the term of the previous European Parliament, only 24 violations of the MEPs’ Code of Conduct were noted, without any penalties brought against MEPs. What is the purpose of establishing yet another body with no binding powers?

Sabrina Pignedoli. I believe that consolidating the mandate on ethics oversight in a single European body offers opportunity for action.  Ethics must go hand in hand with rules and legislation. There are several cases of conflict of interest and revolving doors that cause indignation and are perplexing. It is important for European citizens who vote to have oversight of these cases.

The question of ethical oversight is about better legislation.

Of course, an Independent Ethics Body (IEB) with no power could become a blunt (instrument). But it should not be an oligarchic body that dispenses sanctions on the basis of ethical convictions. There needs to be a balance and we must in time assess the results of this process. That said, the European Parliament is often involved in assessing conflicts of interest.

Sabrina Pignedoli. The issue of revolving doors is a very serious one.

Many managers of large companies sign exclusivity clauses, which limit their future assignments. I do not see why the same cannot happen in the European institutions. It is not difficult to imagine legislation to regulate this but, of course, it has to go through the legislative process and, as we know, it is not only Parliament that has to decide. MEPs have to assess individual cases and use their political weight. There have been very serious cases, in which ethical considerations, as mentioned earlier, would have suggested greater sensitivity from those who want to do a bit too much with their lives …

Brussels Morning. According to the research of the EU Office of Transparency International, a total of 521 out of 748 newly elected MEPs declared 1503 extra-parliamentarian activities, of which 842 are paid. Among the MEPs declaring earnings from extra-parliamentarian activities, 48 declared annual gross earnings that may be higher than the pre-tax annual salary they receive as MEPs. How do such practices safeguard the proclaimed independence and impartiality of MEPs?

Sabrina Pignedoli. It is important to monitor this aspect and the very fact that these incomes are documented allows us to exercise a form of mutual control within the Parliament and, if necessary, to adopt appropriate sanctions.

However, it must be emphasised that there are very different forms of earnings. It’s one thing to receive a consultancy service, it’s another to have an income from property. They are different things. Nor can we think of a parliament made up only of professional politicians who were not active before they were elected. In order to defend the autonomy of the parliament, we have to be very careful about activities that show conflicts of interest, influence of lobbies or other similar issues.

Brussels Morning. Efforts to make the European Parliament more transparent have been voted down, as MEPs refused to shame lobbyists convicted of fraud and corruption, while measures which would make it easier for the public to follow how MEPs operate were also rejected. What was the rationale behind such voting?

Sabrina Pignedoli. You are referring to the Compulsory Transparency Register vote on April 12, which took place in the context of the AFCO Commission and concerned an agreement between the European Parliament, the Council of the European Union and the European Commission.

Sabrina Pignedoli. Of course, you are right.

The golden visa system is a Trojan horse for money laundering and criminal activity. It is definitely a European problem, but it is created by individual Member States, who make easy money from this activity. In the LIBE Committee and during the plenary session on 22 October, we asked Justice Commissioner Didier Reynders to take action to stop the sale of passports and golden visas by member states. Before giving away the EU citizenship, we should ask where this money comes from.