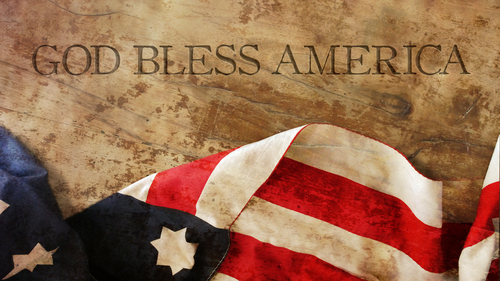 New York (Brussels Morning) Americans have grown accustomed to most politicians proclaiming, or perhaps imploring, “God Bless America” or “God Bless the USA.” This is particularly common around the recently passed July 4th holiday. Similarly, it is de rigueur for politicians of both parties to refer to the US as the greatest country in the world. Most Americans find it vaguely, or not so vaguely, subversive when that assertion is questioned. Occasionally, the announcement of America’s greatness is modified to be “the greatest country ever.”

Describing any country as the best, now or ever, is also completely meaningless. What are the criteria for this? How is the idea of best country measured? Who is being asked to decide? How would we know if this we were, or were not, the best country? Nonetheless, in America this is not just a boast or a slogan, but something that is widely believed.

Implicit in this belief is that the rest of the world is, in one way or another, envious of us. The proof of this, according to those who believe it, is that people from all over the world seek to immigrate to the US. This is an absurd argument. It is true that millions of people immigrate or have immigrated to the US from all corners of the world, but people immigrate to many other countries as well. There are many European countries that also have substantial numbers of immigrants and refugees.

Globally, people move from one country to another all the time to escape persecution, seek a better life and myriad other beliefs. If Americans genuinely believe that we are unique because people immigrate here in large numbers, that speaks more of the sorry state of American education than to any kind of meaningful political reality. Second, although there are millions of people who immigrate or would like to immigrate to the US, a much larger proportion of people do not immigrate or have the desire to immigrate to the US. Generally speaking, with some exceptions, only those who are desperate and do not have a good life in their country of origin immigrate to the US – or anywhere else. This sounds like an obvious statement – because it is – but it is nonetheless pertinent.

This trope about America being the greatest country is not just an example of boastful American hyperbole. The subtext of these boasts is “shut up and don’t criticise the USA.” According to this thinking, if the US is the greatest country in the world than there is no need to work to make it better and that any discussion of making it better is criticism that is inappropriate because this is the greatest country ever. If you are not American this just seems kind of silly and offensive, but for Americans it is a powerful political force.

That is why calling America the greatest country ever is, at its core, an expression of insecurity. A more reasonable and honest assertion such as “I like my country” or “on balance, the US is a pretty good country,” on the one hand lacks the bravado that is frequently succor for the insecure, but it also leaves the door open for criticism or suggestions about how to make the country better, which are, in turn, anathema to the insecure.

This vision of America’s unique greatness is part of the foundation of American foreign policy. After all, the greatest country ever should be entitled to intervene in the affairs of other countries, pursue its interests around the world and set the rules for international relations. American elites have believed those things for decades and telling the American people that this is the greatest country ever is part of the way those policies have been explained and sold to those people.

Little thought is given to how absurd this all sounds to the rest of the world, but it frequently and often implicitly informs foreign policy. It is not hard to understand how a country that believes it is the best in the world will view itself as having the right to play a unique role in the rest of the world. It is equally easy to comprehend how that attitude could lead to major missteps and tensions with the rest of the world.

The American obsession with our perceived unique greatness is more than the quirk of overly exuberant politicians wishing to flaunt their patriotism, but reflects an arrogance, and myopia, that is a force of conservatism at home and helps lead us into too many mistakes overseas. Politicians are not going to stop calling America the greatest country ever anytime soon, but we should not let these claims go unscrutinised or ignored.