What is the UK-Australia Free Trade Deal?

by Kathryn Campbell
in World 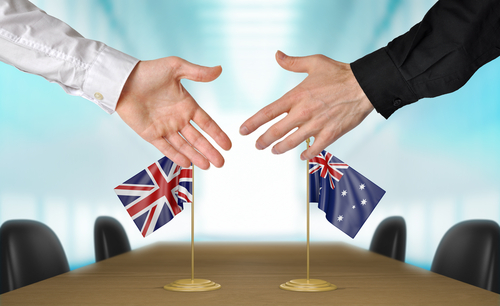 United Kingdom and Australia diplomats agreeing on a deal

Brussels (Brussels Morning) The current trading relationship between Australia and the UK has been full of potential but infrequent one-off deals. A lot of the trade activity between these two countries comes from individual deals between companies or deals brokered by trade missions. Recently, several deals have involved UK companies exporting goods and services to Australia and UK investment in Australian businesses and Australian investment in the UK.

How will the recent free trade agreement between Australia and the UK benefit both countries and trade in general?

The UK-Australia Free Trade Deal is a bilateral free trade agreement between the United Kingdom and Australia. The agreement will increase trade and investment between the two countries.
This will allow for tariff-free trade in goods and services and greater access to the Australian market for British agricultural products such as lamb and beef. There are also opportunities for businesses in both countries to invest more easily across borders., reducing costs as they currently stand and encouraging greater import and export between the UK and Australia.

While the UK farmers and agriculture sector has some concern that the trade deal may negatively impact them, International Trade Secretary Anne-Marie Trevelyan has reassured the collective farming community by ensuring the deal includes many safeguards and agreements, including limits and gradual trade for ten years.

Currently, Australian beef and sheepmeat trade to the UK is only 0.15% for beef exports and 14% for sheep meat. All other beef and sheepmeat imports have been shipped from other countries. Therefore, the potential to grow this percentage from Australia through this trade is positive, without negatively impacting national UK meat supplies.

Australia Praises the establishment of the second-largest trade contract with another country.

In recent years Australian products have been boycotted by China bought on by political unrest and differences. The result caused tremendous strain and financial loss to wine, beef, and sugar farmers and producers.

The Beef Industry is still reinforced by 70% of its exports going to Asia-Pacific countries in trade agreements still supported and current. However, the boycotting of the wine industry has had disastrous effects on many, and to many, this trade agreement is the lifeline they have been looking for.

What does this mean for the individual and small business owners?

For many companies and individuals, this also means greater flexibility for employees and company owners to live in the UK and Australia, dependant on where they are required to support the export of their product.

Tourism will receive a boost, as will agriculture, with part of the agreement being an extension to Visa time-limits to three years for young UK visitors working in the agriculture industries and other industries traditionally supported by Backpackers and working tourists.

Australia will welcome Qualified UK Professionals from roles not traditionally captured in the Skilled occupation list to work, reside, and with greater flexibility for residency in roles such as architects, accountants, and lawyers.

While there appears to be apprehension in the UK farming sector due to Australia getting almost all terms it requested, it does appear on all facades to be a win-win situation for both countries.