by Paul Taylor
in Opinion 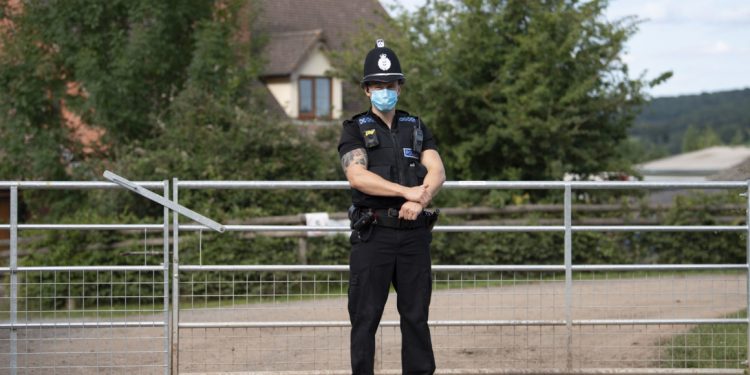 MATHON, UNITED KINGDOM - JULY 12 - JULY 12: A police officer wearing a surgical face mask stands at the entrance to AS Green and Co farm on July 12, 2020 in Mathon, Herefordshire. AS Green and Co, based in Mathon near Malvern, has said 73 of its 200 employees have COVID-19 following an outbreak there. Workers are being asked to isolate on the farm and stay within household groups to reduce the risk of spreading the virus within the workforce. (Photo by Matthew Horwood/Getty Images)

Paul Taylor, a contributing editor at POLITICO, writes the “Europe At Large” column.

PARIS — Terrorists, gangsters and people-smugglers will be among the big winners if negotiations on the United Kingdom’s future relationship with the EU end without an agreement later this year.

It’s not just the gilded statue of the goddess of justice atop London’s Old Bailey Central Criminal Court that will be blindfolded. U.K. police and prosecutors also risk being suddenly unsighted by the loss of vital real-time information.

Instant access to passenger data, DNA, fingerprints and criminal records around Europe will be a thing of the past. Extradition may take a year or more rather than an average of 48 days under the European Arrest Warrant. Requests for judicial cooperation may revert to being handled in slow motion through diplomatic channels rather than directly between justice officials.

The looming hit to public safety and crime-fighting is rarely mentioned in coverage of the Brexit negotiations, which is all about trade and fish.

And even if negotiators were to strike a deal on cross-border police and judicial cooperation by October alongside a currently stalled trade agreement, British law enforcement is bound to suffer a significant blow from the loss of 24/7 connectivity with some of the world’s richest and most advanced integrated criminal intelligence databases.

“Effective policing is intelligence-led [and] is also about being fleet of foot and able to do things and exchange information and intelligence quickly, almost in real time,” Deputy Assistant Commissioner Richard Martin, the Brexit specialist at the U.K. National Police Chiefs’ Council, told the House of Lords earlier this year. “Anything that stops us doing that causes us problems.”

This ought to be a national scandal in a country that is one of the biggest targets of Islamist militants, drug-runners, people-traffickers and cross-border money launderers. Yet the looming hit to public safety and crime-fighting is rarely mentioned in coverage of the Brexit negotiations, which is all about trade and fish.

A Conservative government that prides itself on enforcing law and order should be alarmed at the imminent loss of capacity. A Labour opposition led by a former director of public prosecutions should be hammering home the threat to internal security at every weekly grilling of the prime minister.

Instead, ministers are rarely questioned about the issue in parliament or the media, and get away with windy “this will hurt them as much as it hurts us” evasions.

Asked by Lord Peter Ricketts, a former national security adviser, how security would be impacted if there is no deal this year on future U.K.-EU relations, James Brokenshire, minister of state for security, said in a letter: “This would result in some mutual loss of capability for the UK and EU Member States. However, the UK has well-developed and well-rehearsed plans in place to transition cooperation with EU Member States to alternative, non-EU arrangements by the end of the Transition Period, where available.”

The alternatives he cites included falling back on Interpol, the more limited and slower global police network, and on bilateral cooperation with European neighbors.

To put that weasel phrase “some mutual loss of capability” into perspective, British police checked the Schengen Information System (SIS) — which contains information on 79 million individuals including criminals, terrorists and missing persons — some 603 million times in 2019, according to Martin of the U.K. National Police Chiefs’ Council.

This yielded hundreds of hits with wanted persons and led to dozens of suspects being handed over within 60 days under the fast-track European Arrest Warrant, which replaced cumbersome extradition procedures in the wake of the 9/11 attacks.

As an EU member, the U.K. had full access to the databases and the alert system even though it never joined the 26-nation European Schengen area of passport-free travel. Some might call that having your cake and eating it. Now, however negotiations end, the future looks cake-less.

No third country — not even Norway, which is a member of Schengen and of the European Economic Area, automatically adopting all EU single market rules and data protection standards — has direct access to the European police agency Europol’s database.

Norway, Switzerland and Iceland — like the United States — have liaison officers with the relevant EU bodies, including Europol and the Eurojust judicial clearinghouse, and have to submit individual requests for data on named suspects, vehicles or crime scene records. The Norwegians say such indirect searches take so long and come with such a battery of restrictions on the use, storage and onward transmission of the data that they often lose their operational relevance.

It’s hard to exaggerate the backward step this represents for U.K. police. It’s like replacing a state-of-the-art smartphone with a 20th-century telex machine. There will be a loss for EU members too, since the U.K. has been a major contributor of police and security intelligence, as well as a big source of EAW extraditions to other European countries.

Some U.K. officials hope London can achieve a level of access close to Denmark’s. Copenhagen left Europol in 2017 but reached a cooperation agreement with the agency that allows Danish-speaking Europol officials to continue to trawl the database and pass information to the Danish police.

However, Denmark remains an EU member, respects all EU data protection laws and accepts the jurisdiction of the Court of Justice of the European Union over the bloc’s security agencies and its handling of personal data — something Prime Minister Boris Johnson has insisted the U.K. will not do, stating there must be “no role” for the European court in Britain’s future relationship with the EU.

Yet any British access to the European police and justice databases would be subject to at least indirect CJEU supervision of the safeguards for handling personal data and human rights. This month’s CJEU decision upholding a complaint by Austrian data privacy campaigner Max Schrems against the EU-U.S. Privacy Shield is also a warning signal that even if the European Commission approves the U.K.’s data security regime, London could lose access to data from the EU if the adequacy of its privacy safeguards were successfully challenged in the Luxembourg court.

Some Brussels officials have long suspected that the U.K. was trawling EU security databases on behalf of the United States, its Five Eyes ally, just as Sweden is suspected of doing to help its neighbor Norway.

In January, Dutch liberal MEP Sophie in ‘t Veld accused the British government of behaving “like a bunch of cowboys” after a leaked EU report revealed “deliberate violations and abuse” including U.K. authorities unlawfully copying information from the Schengen database.

If London keeps up this curiously cavalier attitude to the loss of crucial security cooperation, it shouldn’t be surprised to find itself on the backfoot on fighting crime in a few months’ time. And given the acrimonious tone of negotiations and the difficult talks ahead, counting on a friendly EU member to breach the rules and help out with access to the databases is not the smartest bet to make.