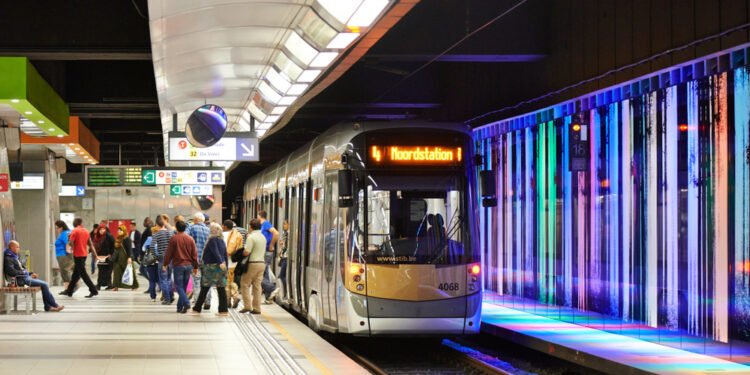 Brussels, (Brussels Morning)- As with the NMBS, STIB is also preparing for a lot of extra energy costs. For the time being, the Brussels transport company does not intend to lighten or heat stations or waiting areas less. Distributed energy purchases and sustainability measures should initially help to reduce costs. However, it cannot be ruled out in the longer term that the ticket price will go up.

The STIB consumes 250 gigawatts per year for the network of trams and metros, but also to supply its electric buses and buildings with electricity. This concerns 0.3 percent of Belgian energy consumption in total, saysa BRUZZ reporter. By way of comparison: an average family with two children consumes 3,500 kilowatts per year.

The NMBS expects the energy bill to rise to 432 million euros next year, almost doubling again compared to the already sharply increased bill this year. To cover the costs, the Belgian railways plan to reduce the lighting on the platforms at night, as well as the facade lighting. In the waiting rooms of the stations, the heating is set to 15 degrees.

STIB finds it difficult to estimate exactly how much energy costs will increase. There are still two energy contracts in progress: one for gas and one for electricity. STIB concluded the gas contract just before the summer. That will run until 2023. “We are reasonably good in that area,” says Van hamme. “Even though we see rising prices there too.”

For the time being, the Brussels transport company does not intend to lighten the stations less or to heat the waiting areas less. The feeling of safety for passengers plays a decisive role in this. “We have been working on energy savings for some time and have been working for years to replace all lighting in the stations with LED lighting,” says Van hamme.

STIB has a contract for electricity until the end of 2022. She is currently negotiating with various suppliers to purchase energy in tranches next year. “The advantage is that you can then buy at the best conditions at the time,” says Van hamme. “If we were to sign a contract for one year now, it would be expensive anyway.”

In addition, STIB is working on other energy-saving measures. For example, the braking energy of the metro and tram is reused. STIB also has 8,800 square meters of solar panels, which corresponds to the solar panels of four hundred households. In depots it is prevented that the gate remains open. “In March we already made a call asking if the employees would like to turn off their equipment and the lights.”

Van hamme says that STIB strives not to increase the ticket price, but in the long term the income will have to increase in one way or another to cover the expenses.