Poland expects war with Russia in near future 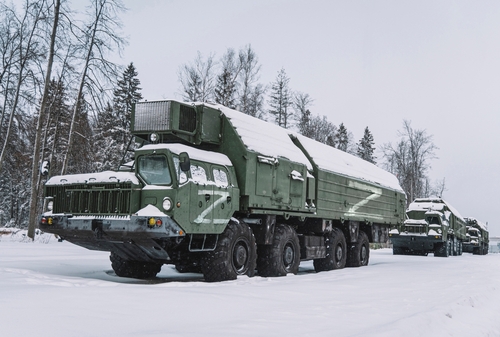 column of heavy military equipment of Russian armed forces against the background of a winter forest. Symbol Z on military vehicles. Illustration of military operations. The concept of war in Europe.

Belgium (Brussels Morning Newspaper) Warsaw believes there is serious danger of a Russian invasion of Poland in the coming years, which is the main impetus behind the country’s recent drive to rearm its armed forces as soon as possible, according to a high-ranking government official.

Deputy Defence Minister Marcin Ociepa told Polish Gazeta Prawna on Wednesday that there is “a serious risk of a war with Russia”, which could take place within three to ten years, depending on the outcome of the ongoing war in Ukraine. “It will depend on how many years Russia will need to rebuild its military potential,” said Ociepa.

Ociepa’s statements were given as justification for the Polish government’s recent decision to significantly increase its military budget to nearly 21 billion euro, which would put it at 5% of the country’s GDP.

Polish Defence Minister and Deputy PM Mariusz Błaszczak announced last month that the country plans on spending as much as 120 billion euro on rearming its military in the coming years, while defence analysts noted that Polish tank procurement plans are setting the country on course of having the largest tank fleet in Europe.

Last week, Błaszczak confirmed that Warsaw will be paying for 250 M1A2 Abrams tanks, with the US armed forces already having loaned several units to the Polish army to be used for training. Poland will pay 1.15 billion dollars for the US-designed tanks, which will be manufactured in Poland, and equipped with the latest, Systems Enhancement Package v3 (SEPv3).

The Abrams tanks will be deployed with 1st Warsaw Armoured Brigade and used as shock forces, while the rest of the country’s completely modernised tank fleet will consist of 980 South Korean-designed K2 Black Panther tanks. Somewhat lighter and smaller than the Abrams, the K2 are still considered main battle tanks and are equipped with latest sensors, electronics and weapon systems.

The South Korean deal, announced earlier last month, similarly included provisions for the majority of tanks – 800 in total – to be produced in Poland, in effect contributing to the Polish economy.

Poland will also be procuring three squadrons (48 units) of South-Korean made FA-50 jet trainers which double as light fighters. Błaszczak  explained that the FA-50s, co developed by the Korean KAI and US defence contractor Lockheed Martin, was picked because Lockheed Martin was unable to pledge timely deliveries on its F-16 jets, currently the backbone of Polish air forces, as the manufacturer is focused on the production of F-35 Lightning II, its latest fifth generation stealth multirole fighter.

Poland already ordered 32 F-32 jets in 2020, but is currently preparing plans to double that order, to form a total of four squadrons of 16 fighter jets. They would replace the country’s aging Sukhoi Su-22 fighter-bombers and supplement its current fleet of 48 F-16 jets.

Poland has long warned Western European countries of the potential danger coming from Russia, but its warnings have been largely ignored, believed to be a leftover Cold War sentiment among Polish politicians.

In 2008, as Russia invaded Georgia, Polish President at the time, Lech Kaczýnski, visited Tbilisi accompanied by Ukrainian, Lithuanian and Latvian leaders, and offered a stark warning to the West. “Today its Georgia, tomorrow Ukraine, the day after the Baltic countries and then, perhaps, it’s time for my country, Poland”, said Kaczýnski.

Poland and the Baltic states were the fiercest opponents of EU’s growing business ties with Russia, especially the increasing dependence on Russian gas. Despite invasion of Georgia, Germany and Russia opened the North Stream pipeline in 2011, with Chancellor Angela Merkel believing that economic engagement with Moscow is the safest route to peace in Europe.

The 2013 annexation of Crimea, which was done through a sham referendum secured by Russian special forces, and the subsequent assistance in equipment and troops sent to pro-Moscow “separatists” in Ukraine, brought about limited sanctions against Russia, including its removal from the G8 group of countries, but it was not enough to change German policy, with Merkel signing a deal in 2015 to construct the Nord Stream 2 pipeline, despite vocal opposition from Poland and the Baltic states.