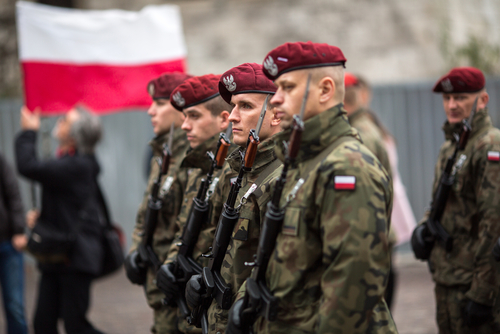 Article 4 has been invoked only six times since the Alliance was established in 1949. The Baltic states and Poland had debated doing so again late last year in response to the Lukashenko regime’s fake migrant crisis.

The war in Ukraine has reintroduced Poland to its historical geopolitical quandary – that of a state existing within an unstable security environment. Now, the country has been preparing reception centres and hospitals to handle the anticipated influx of people fleeing Russia’s invasion of Ukraine.

The humanitarian crisis brings a new urgency to Poland’s efforts to acquire front-line state capabilities and position its forces along its eastern border. Around 1.5 million Ukrainians already live in Poland, drawn there by a tight labour market that shares a similar language. In early February, the government stated that if necessary, it would accept 1 million Ukrainian refugees.

Poland’s security policy is based primarily on NATO and Warsaw’s close relationship with the United States. Allies implemented the 2016 Warsaw Summit decisions to establish NATO’s forward presence in Estonia, Latvia, Lithuania and Poland and to develop a tailored forward presence in the Black Sea region.

Before Russia’s invasion, Poland’s Foreign Minister, Zbigniew Rau, warned that Europe was nearer to war than it has been in 30 years because of the current tensions. Rau did not mention Russia by name, but he did cite tensions in Ukraine, Georgia, Armenia, and Moldova, all of which find themselves in active or frozen conflicts with Russia. Poland, Sweden, Finland and the Baltics, arguably,  are next.

Today there is a growing sense of insecurity on the Alliance’s eastern flank, as Moscow aims to become once again the overlord of Eastern Europe. Russia’s aggressive stance successfully prevents Poland from becoming an outward-looking actor, but it also strengthens Poland’s position within the Western alliance.

To serve as a deterrent to Russia’s military adventurism, Poland must complete the modernisation of the remainder of its tank fleet before Russia gains an overwhelming advantage in conventional forces. Poland’s army still uses 500 obsolete, Russian-designed tanks that are now more than 30 years old.

Poland had declared its ambition to become the strongest military power in Central Europe. The government plans to expand the Polish Armed Forces to a staggering 300,000 personnel, a combination of the regular professional army and a part-time volunteer Territorial Defence Force.

The security situation has deteriorated to the point where Poland, as a frontline state, must radically re-arm itself and become one of the best European armies in order to sustain itself alone should it come under Russian attack for a lengthy period of time, while awaiting the arrival of NATO to assist it.

Diplomatic relations between Poland and Russia can only worsen as the Ukrainians, who left to secure their families, now pass back through Polish borders, returning homewards to fight alongside others from the diaspora.  According to Poland’s Border Guard, approximately 22,000 people have crossed into Ukraine since Russia launched it invasion last Thursday.

The US has stepped up its military presence along the eastern flank significantly, including in the Baltic and Black Seas. Warsaw and Washington signed an Enhanced Defence Cooperation Agreement in November 2020, which allowed for the stationing of US forces and military equipment on Polish territory.

According to the Pentagon, US President Joe Biden sent additional troops to Europe amid ongoing fears of a Russian invasion of Ukraine. Approximately 2,000 troops were dispatched from Fort Bragg, North Carolina, to Poland and Germany, with an additional 1,000 already stationed in Germany being sent on to Romania.

To deter Russian aggression, even before the outbreak of the war, NATO had taken significant steps to reinforce its capabilities along its eastern flank. The deployment of multi-national groups in frontline nations has increased NATO’s presence in the area. Notably, fighter planes from various NATO countries are patrolling the skies above the Baltic states on a regular basis.

“Over the past few months, NATO Allies and European partners have remained unified in opposition to threats against peace and security in Europe. In response to Russia’s unprovoked and unjustified invasion of Ukraine, the Alliance has operationally aligned its maritime, land, air, space, and cyber forces to defend our NATO sovereignty”, stated General Tod D. Wolters, Supreme Allied Commander Europe (SACEUR).

“We are grateful to our allies Canada and the United States for their recent commitments to deploy an additional 7,460 troops, including an armoured brigade combat team, artillery units, a naval frigate, and surveillance aircraft, to support this Alliance-wide effort”, he declared.