Belgium, (Brussels Morning Newspaper) The Russian invasion of Ukraine and the risks of the following humanitarian crisis in this country were the main topics on which today open letters were exchanged by political circles in Brussels.

In the letter is stated that the members of the Parliament are extremely alarmed at the news of the imminent Russian invasion in Ukraine, which according to the evidence, is planned.
– ” You would undoubtedly share our concern over the sovereignty of Ukraine and the lives of the Ukrainian people. First Russia’s military intervention is expected to happen on Tuesday or Wednesday, and various cities are likely to be invaded by Russian troops. Direct military action will lead to millions of internally displaced people and refugees, who will seek safety and international protection in the neighboring countries – Poland, Romania, Slovakia, Hungary, and the Republic of Moldova ” – it’s written in the letter.
In the document, it’s stated that Romania and Moldova particularly are expected to immediately receive hundreds of thousands of Ukrainians escaping the war with Russia and being pushed by the Russian military coming from the east.
– “In this context Moldova, as a de facto buffer zone, will face a strong challenge in managing the refugee flow.
At the same time, there is a high probability that the Russian troops will follow the refugee flow in the same
direction to join with the Russian forces already deployed in Transnistria, which could ultimately even result
in a blockade of Ukraine’s refugees, both from the east and from the southwest. Considering that the events will develop very quickly in the following days, immediate action is needed from the side of the EU in order to protect the lives of fleeing Ukrainian people. We ask you to take all possible measures, in cooperation with the authorities of Moldova and EU countries bordering Ukraine ” it’s written in the letter.
In that order, the MEPs is pinpointing that it is necessary to urgently prepare humanitarian aid facilities for refugees expected to come from Ukraine in the next few days.
– “They will need medical help, shelter, and basic goods because as we know in such a rapidly developing situation, they have not had any time to prepare their departure in advance. EU has all the necessary
tools for such a rapid emergency response. Therefore, we hope that you will include our request into the
humanitarian disaster risk strategy and will immediately deploy the necessary facilities” it’s written in the document. 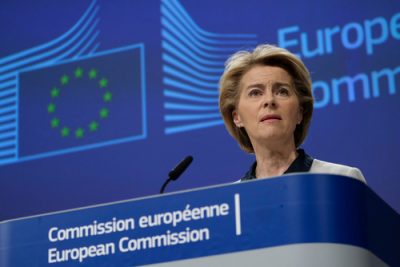 On the other hand, Ursula Von Der Leyen replied. In her answer, it is noted that Ukraine is a key priority for the European Commission.
– “We are following the situation with the utmost attention. We are very concerned about the developments and share your assessment of possible implications, including in terms of population movements in the case of escalation. I would like to underline that we are in close contact with the Government of Ukraine to reiterate our support to the people of Ukraine. At the beginning of February, the Commission tabled a proposal for EUR 1.2 billion emergency macro-financial assistance package for Ukraine. With the government, we also discuss contingency planning and the need to strengthen preparedness to support its crisis-affected population. As regards humanitarian support, the European Commission has been providing humanitarian assistance since the beginning of the conflict in eastern Ukraine in 2014 and is continuing to do so in line with the humanitarian needs. To date, the European Commission has mobilised almost EUR 194 million of humanitarian funding to help the people affected by the conflict ” – wrote Der Leyen.
She additionally replayed that regards the current situation, the Commission is in constant contact with its humanitarian partners and other major donors in Ukraine to prepare for possible aggravation of the humanitarian situation and to rapidly respond to increasing humanitarian needs.
– “In fact, we have authorised our humanitarian partners to use part of the EU funding for preparedness actions. Similarly, we are in contact with potential partners in Moldova to prepare for the potential provision of humanitarian assistance, in case there are humanitarian needs.”- finished Von Der Leyen.

Tags: humanitarian crisis in UkraineMain-Slider
No Result
View All Result