North Macedonia. Is there a life without membership negotiations? 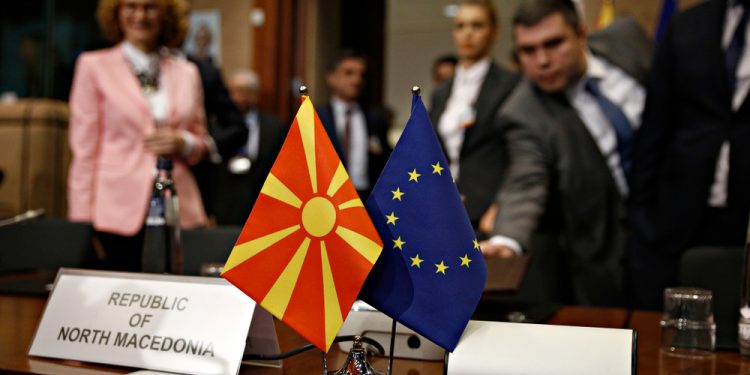 Lublin (Brussels Morning) After Bulgaria vetoed North Macedonian negotiations with the EU, there are still options left for Skopje.

Pursuing integration via the Stabilisation and Association Agreement (SAA) will not be affected by the eventual fall of the Social Democratic Union of Macedonia (SDSM) led ruling coalition and return of conservative and somewhat disgraced VMRO-DPMNE (Internal Macedonian Revolutionary Organisation – Democratic Party for Macedonian National Unity).

What could compromise the EU integration of North Macedonia is fatigue and disappointment caused by the EU enlargement, in which the rules keep changing to the disadvantage of minor players.

The EU enlargement and European integration in general is a process, not simply a single act. In the case of North Macedonia, it has lasted since April 2001 from the signing of the SAA, which entered into force on 1 April 2004 after ratification by all signatory countries.

Macedonia submitted a formal application for EU membership in March 2004, and in December 2005, the country received candidate status. In October 2009, the European Commission decided to start negotiations between North Macedonia and the EU, but the EU Council did not give the green light for talks.

After 2009, the process stalled due to a political dispute with Greece over the name of the Macedonian republic. After the signing and entry into force of the Prespa Agreement in 2019, which has solved the problem of what it is called, it was expected things would move forward. The story that follows is well known. While there is a hope that after the Bulgarian election, the government in Sofia might ease its stance, there is high probability that similar ‘historical’ arguments will be used in the future.

The share of the manufacturing sector in the FDI inward stock reached 36.8% in 2018, which reflects a substantial increase in the share of vehicles and other transport equipment. Looking at these numbers leaves no doubt about the degree of integration the Macedonian economy has with the EU market. Croatia, which will apply to join the eurozone in 2023, experiences a comparative level of trade integration.

North Macedonia will exist without the EU membership status, but it cannot survive without the EU and its market. With its weak economy, underdeveloped and obscure industry, lost goods receiving markets and low purchasing capacity of its consumers, North Macedonia cannot follow the Norwegian or Turkish example. On the other hand, any closer political and economic ties with Turkey, Russia or even China do not present a realistic alternative solution. The EU is what North Macedonia has on the table.

Change of the government

The political scene in North Macedonia is very fragile. Previous elections have been “won” by the SDSM by merely 12 thousand or so votes and 35.89% of voters, while its archenemy, VMRO-DPMNE, received 34.57% support. Although EU integration receives general support in North Macedonia, the emotionally loaded question of national identity, which currently dominates Bulgarian-Macedonian relations, is much likely to cause general discontent among voters.

Despite the nationalist and populist rhetoric, VMRO-DPMNE elites are aware of the lack of alternative solutions to the European integration of North Macedonia. The possible victory of conservative VMRO-DPMNE would not reverse the pro-European course of the previous governments.

Election of the conservative-led government will, however, result in one important aspect of the European integration – its international position would be much weaker at the negotiation table than this one, led by Zoran Zaev. The current prime minister enjoys general sympathy in the EU capitals for his major achievements – appeasement of the Albanian political aspirations, solving the republic’s name, and ultimately, although not finally, signing the treaty on good neighbourhood relations with Bulgaria.

The new VMRO-DPMNE prime minister will not have it. Instead, he or she will have a much harder negotiating position vis-a-vis its Bulgarian counterpart and difficulties convincing other EU capitals about its European commitment.

Continuation of integration via SAA 2

While the formal membership negotiations process has been halted for now by Bulgaria, North Macedonia’s road towards the EU is still open. The integration with EU structures and its market, the political and economic cooperation could develop within the SAA framework.

Silvana Mojsovska from the Institute of Economics in Skopje has advocated for this option recently. Thanks to SAA, liberalization of the movement of goods was ensured (quotas and other restrictions apply to a small number of products), and there have been some achievements regarding the flow of services, capital and labour.

What Mojosvoska suggests is further implementation of the SAA provisions. For example, while North Macedonia has introduced the principle of national treatment to EU companies, while Macedonian companies within the EU might encounter some additional issues when registering or acting on the EU market. Another opportunity offered by the SAA is the protection of vulnerable Macedonian industries from more competitive EU companies.

Given the unequal position of the economies on both sides, this option can be used only by Northern Macedonia. A closer look is also required in the area of free movement of services and capital. For example, Macedonian citizens with permanent residence in Northern Macedonia are still not allowed to open free bank accounts.

SAA is the mechanism for moving the process of European integration in the current circumstances. Of course, in parallel, work should be done to remove the inertia regarding the country’s internal reforms. Reforms are inextricably linked to policy-making, and only good and continuous policies can deliver the desired results and make better use of the SAA”, concludes Mojsovska. Integration of North Macedonia with the EU can progress in some key aspects without the membership negotiations. Why not try.

Is there enough oxygen to breathe?

Lack of unity regarding EU enlargement plans reflected in the Bulgarian veto sends (another) negative signal about the intentions of the EU leaders. It will surely further undermine trust towards the pro-European Zaev and the EU in general.

The SAA was signed 20 years ago for 10 years only. It has been prolonged once, and still, after overcoming the Greek veto, Macedonia did not move any closer towards membership. It is discouraging. Especially when accounting that North Macedonia is a small country and opening negotiations is only the beginning of a long and troublesome process.

Would there be enough energy within Macedonian society to support the great European idea? Many of them have already left the country and have found employment in the EU. Even more are planning to leave North Macedonia. Their European dream has partially come true and partially dispersed — the same concerns elites.

Let us not forget that Milorad Dodik has been a pro-European politician and member of the anti-war opposition in Republika Srpska of Bosnia and Herzegovina. If populism and nationalism will provide significantly more votes than distanced perspectives of European integration, then why not use it for political mobilisation.