Euro, convergence and taxation in Croatia 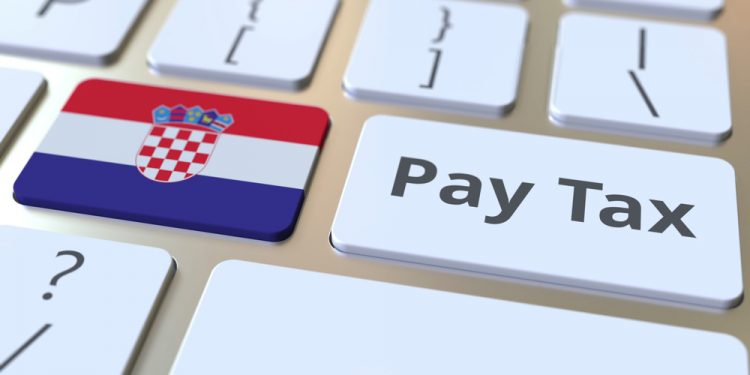 PAY TAX text and flag of Croatia on the buttons on the computer keyboard.

Brussels (Brussels Morning) The introduction of the euro as an official currency depends on the nominal convergence criteria that Croatia has to meet after joining ERM II.

Croatia will receive a positive assessment of nominal convergence if it meets the Maastricht criteria, i.e. if it manages to maintain price and exchange rate stability, demonstrates public finance discipline and achieves the required level of long-term interest rate convergence.

Croatia and other new member states from Central Europe wishing to adopt the euro must choose between the stability of public finances and “catching up” economically with the “old member states”.

According to EU rules, the criterion for sustainability of public finances can be met even when the debt exceeds the reference level, but on condition that it will decline with satisfactory dynamics. If public debt continues to decline with the required momentum and indicators show that the other criteria remain within acceptable limits, Croatia could meet all formal criteria for the introduction of the euro soon after joining ERM II.

The Croatian government’s strategy for the adoption of the euro was arrived at even before the Covid-19 pandemic and links adoption of the common European currency with the country’s economic development. The strategy stresses that structural reforms ensuring productivity gains are key to achieving higher rates of potential economic growth.

The current rate of economic growth in Croatia is insufficient to allow accelerated convergence with the income level prevailing in the developed economies of the euro area (from August 2017 to January 2020, between 2.2 and 3.6% of GDP  and minus 15.1%  in the second quarter of 2020).

In this regard, the government plans to continue comprehensive activities aimed at improving the business environment, reducing the tax burden and increasing the efficiency of the public sector. With 2020 bringing the Covid-19 crisis, these assumptions had to undergo a painful revision. Thus, the budget deficit for 2020 is expected to amount to 7.1% of GDP, with government spending expected to be around 53.4% of GDP (interest payments are 2.1% of GDP), increasing the ratio of gross debt to GDP to 88.6%.

However, the current policy pursued by Prime Minister Andrej Plenković and the Governor of the Croatian National Bank (HNB), Boris Vujčic, is to confirm to the ECB and the euro area countries in the belief that public debt will decline and public spending will be kept under control.

The government expects the budget deficit will be reduced below the critical level of 3% GDP, and public debt-to-GDP ratio restored to a downward trajectory to meet fiscal criteria in the course of this year. The Plenković-led government introduced the so-called five circles of tax reforms, details of the last two of which are presented below.

The penultimate tax reform was presented on July 26, 2019. The changes assumed primarily the reduction of the basic VAT level from 25 to 24%.  At that time, the 20% CIT rate in force was reduced to 12% for entrepreneurs with annual income below ca. 1 million euro (the previous threshold was 400,000 euro). Croatia has an estimated 10,000 within this category (some 93% of all companies in the country).

The fifth round of tax reform entered into force on 1 January, this year. Thresholds for personal income tax were lowered again from 36% to 30% and from 24% to 20%. The CIT rate for entrepreneurs with annual income not exceeding 7.5 million HRK (approximately 1 million euro) has been further reduced from 12% to 10%. The number of beneficiaries is estimated at 93% of all enterprises.

According to the data presented by Deputy Prime Minister and Minister of Finance, Zdravko Marić, the total effect of the four previous rounds of tax reforms is that over 1 billion euro has remained at the disposal of taxpayers. According to government estimates, the new round of tax changes will reduce the tax burden by another 450 million euro.

Despite this significant reduction of expected revenues, the Croatian government fully expects that in 2021 the budget deficit will be reduced below the critical level of 3% GDP, and public debt-to-GDP ratio restored to a downward trajectory to meet fiscal criteria.

The current liberal economic policy of the government and the Croatian National Bank will be tested by the consequences of the Covid-19 pandemic, which has hit the country exceptionally hard. Croatia’s GDP contracted by 15.1%, year-on-year, in the second quarter of 2020, having increased by 0.4% over the previous period.

According to Eurostat data published in December 2020, Croatia is in the penultimate position among the EU Member States in terms of actual individual consumption (AIC) and GDP per capita. The table below shows the change in these indicators in Croatia compared to other south-eastern, central and western European countries.

Such a situation, along with a liberal tax policy, may pose a serious challenge for the Plenkovic government, especially since the strategy to combat Covid is based on state intervention and the use of European funds. Cuts in public spending is one issue, but the Croatian state continues to struggle with inefficient public administration. In the corruption ranking (2019 CPI), Croatia (47 points out of 100) is closer to Montenegro (45 points), Belarus (45 points), Greece (48 points), Hungary and Romania (44 points) than Poland (58 points), Slovenia (60 points) or the Czech Republic (56 points).

The scandals related to representatives of regional and local authorities discovered by local anti-corruption services may be part of a campaign aimed at punishing corrupt politicians and, on the other hand, at mobilizing regional leaders to act more effectively in the area of ​​obtaining and using European funds.

There are high hopes for Natasza Tramišak, appointed to the post of Minister of Regional Development and EU funds. The reformist approach to personnel policy, however, is unlikely to yield results for at least two years. The use of EU funds by Croatia also leaves much to be desired, although the trend is definitely positive and allows for optimism about the future.

In sum, the issue of sufficiently high economic development while maintaining an adequate low level of public debt continues to be a challenge for the Plenkovic government. Yet, looking at the prospect of the use of EU funds and efficient state management by the administration, and taking account of the example set in the region of South-Eastern Europe, suggests we should limit expectations to a minimum.