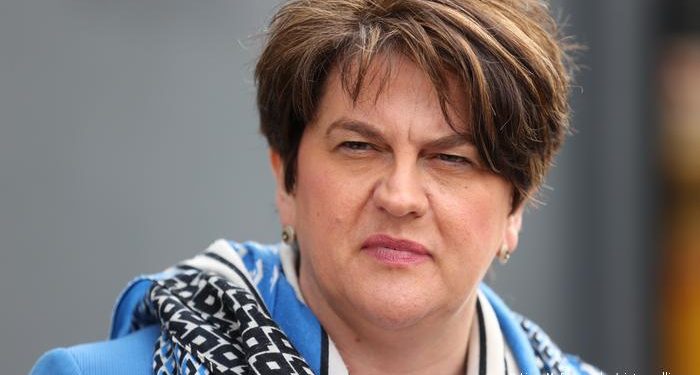 Brussels (Brussels Morning) Northern Ireland’s First Minister Arlene Foster has announced she will step down at the end of June, capitulating to pressure from her Democratic Unionist Party (DUP) over her perceived lack of leadership on Brexit and social issues, Reuters reported.

Foster’s decision follows a letter by a majority of DUP deputies in the Northern Irish parliament that was sent on Wednesday, calling for a confidence vote in her leadership over her mishandling of Brexit negotiations.

Foster vehemently resisted compromise on the terms of the UK’s withdrawal from the European Union when former Prime Minister Theresa May led the British government, a time when the Conservative Party’s slim majority depended on the support of the DUP’s ten lawmakers in the House of Commons.

As May resigned, unable to push her withdrawal agreement through the Parliament, Foster threw the DUP’s support behind her successor Boris Johnson, trusting he would continue to represent the Unionists’ positions. However, the move backfired after the December 2019 elections, since the result meant that Johnson no longer needed the DUP to stay in power.

Johnson broke the DUP’s “blood red line” and agreed to EU demands to introduce customs checks between Northern Ireland and the rest of the UK, effectively pushing NI closer to reunification with the Republic of Ireland, and raising a wall between the province and Britain.

Riots in the streets

The so-called Northern Ireland Protocol preserved the 1998 Belfast Good Friday Agreement by preventing a hard border on the island of Ireland. However, it has since raised tensions in the province as pro-British unionists rioted in the streets, protesting the perceived growth of power of the Irish nationalists.

Foster repeatedly called on the EU to cancel the Northern Ireland Protocol, without success, while some DUP figures demanded she present an even harder line. Other colleagues accused her of being too liberal, claiming her opposition to gay rights and women’s rights is not stringent enough.

Her successor will face the difficult challenge of creating a new policy for the party, which has been steadily losing ground in recent years to the moderate, cross-community Alliance Party and the hardline Traditional Unionist Voice (TUV).