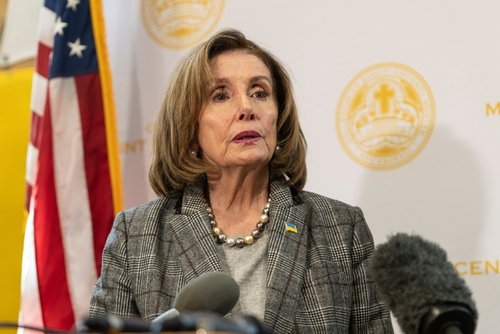 The USA, (Brussels Morning Newspaper) “There is no greater official honor for me than to stand on this floor and to speak for the people of San Francisco.” These were the words Nancy Pelosi used while explaining her decision to step down from her leadership position in the House Democratic Caucus while remaining in Congress. There is every reason to believe Pelosi was telling the truth when she spoke those words. Nancy Pelosi has been a fixture in San Francisco political life since well before she ever ran for Congress. Although Pelosi grew up in Baltimore and went to college in Washington DC, she is deeply tied to San Francisco and has represented most or all of that city in congress since 1987.

Growing up in Catholic San Francisco in the 1970s and 1980s (even if like me you happened to be Jewish) the Pelosi’s seemed to be everywhere. Nancy and Paul Pelosi had five children relatively close to me in age who, like me attended, Catholic School. Even in back in the 1970s, Pelosi was a player in the California Democratic Party. She did not hold elected office, but was an influential behind the scenes political figure with close ties to Democratic Party leadership. Nancy Pelosi’s brother-in-law Ron Pelosi was a powerful member of San Francisco’s Board of Supervisors during that decade which further bolstered her name recognition when Nancy Pelosi ran for congress the first time.

Pelosi was also unusual then because although she was very much part of the party’s establishment, she was one of the few prominent Italian Americans who identified with the more progressive wing of the Democratic Party. In 1975, she supported the candidacy of another progressive Italian American who sought to become mayor of San Francisco by bringing together a coalition of racial minorities, gays and lesbians, progressive labor unions and other, frequently, younger progressives. Today that is the standard Democratic coalition, but it was not so common in the mid-1970s.

Shortly before this year’s election, there was an assassination attempt against Pelosi. An assailant, David DePape, broke into her home in San Francisco and when he couldn’t find the Speaker, assaulted her husband. While many recoiled at this act of violence, for San Franciscans of a certain age we couldn’t help think of another time when an angry white man poisoned by the reactionary tropes and fears of his day sought to assassinate our leaders. Dan White was more deadly than DePape and forty-four years ago today killed George Moscone, the progressive Italian American mayor Pelosi has supported in 1975, and Harvey Milk. Those murders scarred San Francisco badly and set back the city’s progressive movement just as it was beginning to gain some political power.

White was a former policeman and fireman who had been elected to the Board of Supervisors in 1977, but resigned his position in early November of 1978 citing financial pressure. In those respects White differed from DePape who is probably best understood as a drifter whose politics also drifted from the weirder corners of the far left to the more violent and conspiracy obsessed quadrants of the far right. However, despite their differences, White and DePape were both motivated by a sense of white grievance and believed they were losing their city or culture to people who were not like them. DePape was Canadian, so his white grievance should be understood in a larger international context, but the sentiment driving White’s fear and hostility towards a changing San Francisco would not stand out at a MAGA rally today.

Fortunately, Pelosi was not home at the time of the break-in; and it appears that her husband Paul may recover from the fractured skull and other injuries suffered at the hands of the hammer wielding DePape. Nonetheless, this attack, as many have pointed out, occurs in the context of a attempt to kidnap the Governor of Michigan, a shooting at a congressional baseball practice, the insurrection at the Capitol and escalated violent rhetoric in recent years. It is indeed true that we are experiencing a period of increased political violence, but it is also true that political violence is deeply engrained in America’s political DNA.

In the half century since Dan White’s murderous actions, a lot has changed in San Francisco. George Moscone’s progressive vision for the city has faded as tech money has made a powerful mark there. However, the scars of that day have never fully healed and were reopened when the Pelosi’s home was attacked.