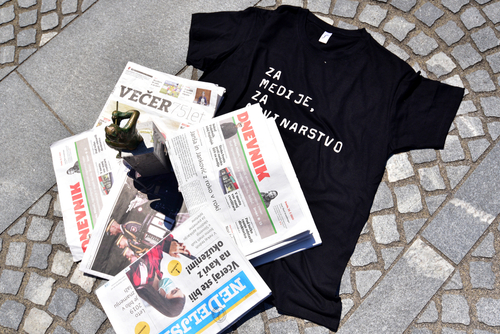 The European Parliament mission to Slovenia confirms rule of law concerns, having witnessed the great pressure being brought to bear on state-monitoring institutions and hostile hate-speech from Prime Minister Janez Janša.

Brussels (Brussels Morning) Key EU principles of the rule of law ranging from media freedom, justice equality, to anti-corruption and standards of democracy have been subject to challenges in a number of member states lately. Countries like Hungary and Poland have been shifting towards a more authoritarian system, as they move to take control over the media and the justice system, for example. Now, unfortunately, another country is attempting to join “the dark side”. This time it is Slovenia, which currently holds the EU Council Presidency, and is led by a conservative nationalist right-wing Prime Minister in Janez Janša.

Numerous reports on the state of the rule of law in the EU warned that the situation in Slovenia is deteriorating rapidly. This is why, along with seven other Members of the European Parliament (MEP), I embarked on a three-day, fact-finding mission there that was organised by the Budgetary Control (CONT) and Civil Liberties (LIBE) Committees. The purpose was to discuss the prevailing situation with national authorities, civil society organisations, academics and journalists in Slovenia.

PM Janša refused to meet our delegation and discouraged other members of the government from doing so. Instead, he launched an extremely aggressive and disrespectful series of attacks against some of our delegation members. His hate-speech fueled a Twitter war that featured slanderous references to the MEPs as “puppets” of George Soros, propounding the kind of anti-semitic conspiracy theories more commonly associated with right-wing demagogues of Trump-era United States. Such behaviour, coming from an EU leader, especially one who currently holds the EU Council Presidency, is both shocking and completely unacceptable.

Notorious for his penchant for publicly blasting and denouncing anyone on his social media or on his Nova24TV channel who might oppose or disagree with him, PMJanez Janša, known as “mini-Trump” or “Marshall Twitto”, acted no differently during our visit.

Leaders of the Information Commissioner’s Office, the Commission for the Prevention of Corruption, the Court of Audit along with the Human Rights Ombudsman recently signed a letter citing their “grave concern” at the sustained pressure of politics on their respective institutions. The government coordinates such attacks through its use of media and social networks and, while they remain still reliably independent, the institutions concerned cannot withstand such pressure forever.

Despite Mr. Janša’s crude attempts to discredit the EP observation mission, the outcome shows that when it comes to the media environment in Slovenia, for example, journalists describe the situation as “very stressful and brutal”. They face constant attacks and financial cuts by the government. In his attempts to silence and control media that are not openly pro-government, Janša does not hesitate to come down heavily on those who criticise his policies.

For example, his government suspended funding for the Slovenian Press Agency (STA) after being called “a national disgrace”. Currently, the agency survives on public donations. Independent journalists, especially women, have been threatened by so-called government-organised “witch-hunts”. These have included some instances of reporters being delivered packages containing suspicious white powder or being threatened with rape.

In light of these reports and allegations, I believe there should be wider EU support to protect media freedom across the Union. There is a strong need for EU funding to help journalists, especially those who are directly attacked and threatened for doing their investigative work. Moreover, there should be more general EU oversight of press agencies to protect their independence against political pressure from national governments.

The Janša government also uses a wide array of intimidatory lawsuits against public participation (SLAPP) and manipulates measures to deal with the ongoing pandemic to make public gatherings illegal. Only a few weeks ago, anti-government protesters were met with brute police force and more than 400 canisters of tear gas were fired at rally participants. The Minister of Interior has been quoted as calling the protestors “pigs”, as I was told by colleagues from the Slovenian Pirate Party, which is critical of Jansa’s actions and a part of the opposition.

Another very problematic finding is Janša’s refusal to nominate two prosecutors to the European Public Prosecutor’s Office (EPPO), which is currently fighting large-scale crimes against the EU budget. His refusal to nominate is based on the fact that the two investigated him personally years ago. This effectively blocks the EPPO’s cross-border investigations involving Slovenia, which puts the entire EU at risk. Related to that, Janša has also blocked the nomination of several national prosecutors.

Last year, when the EP sent a similar fact-finding mission to the Czech Republic consisting of six CONT members, myself included, the Czech Prime Minister Andrej Babiš was hostile and insulting towards the entire delegation, at one point calling me a “national traitor”.At the time, the European People’s Party (EPP) was very vocal in objecting to Babiš’s remarks. Now, when a comparable strategy is used by a PM from within its own ranks, the EPP remains silent.

What I and my colleagues have observed in Slovenia is very alarming. The European Union and Slovenian citizens are experiencing increased pressure on the very tenets of the rule of law, as the government attempts to undermine the independence of state-monitoring institutions. Added to this, the public debate environment is increasingly dominated by hate speech and threats. EU support is more vital than ever if media freedom is to be protected in Slovenia.