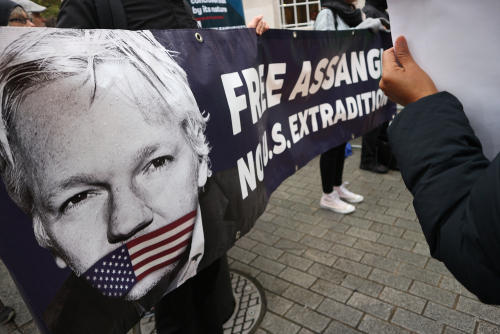 London/UK - October 26 2019: Supporters of Julian Assange have gathered outside the BBC studios in protest at his imprisonment in HMP Belmarsh. Assange is accused of espionage by USA.

Belgium, (Brussels Morning Newspaper) An open letter on the topic of the award ceremony for the Sakharov Prize 2022 was addressed by Mep Sabrina Pignedoli to the Conference of Presidents of the European Parliament. The initiative of Pignedoli was supported by 27 of her colleagues.

“Among this year’s finalists is Julian Assange. It is not the first time, nor will it be the last, that finalists and winners find themselves in prison because of their activities: recall Navalny’s empty chair last year. In the case of the WikiLeaks founder, however, for the first time, the imprisonment occurs in Europe, in a country, Great Britain, which was already a member of the European Union and with which we have always had close cultural, economic, and political relations.” it’s written in the letter.

The document continues that the future of freedom of the press and the right of citizens to be informed is at stake in Assange’s case, as Nobel Prize laureates, UN agencies, and the Council of Europe have also pointed out.

“Numerous NGOs, the International Federation of journalists and Unions, and National journalists’ associations have underlined the risks that such a case poses for democratic transparency and the work of governments,” it said in the document.

The MEPs ask for authoritative support to make a request to the government of Great Britain to allow Julian Assange to attend the award ceremony in Strasbourg on 14 December 2022, to avoid another shameful empty chair.

“It would be very important for the European Parliament to have a united stand on this important matter, in the name of those rights of freedom of thought of which the Sakharov Prize itself is an expression,” it stated in the letter of the MEPs.