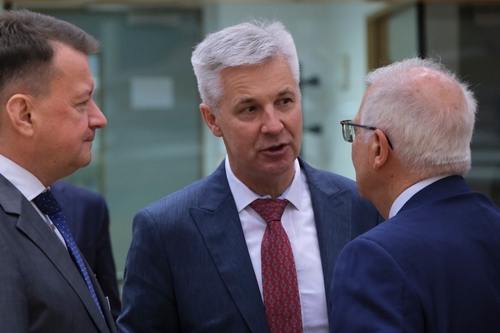 He pointed out that military service should be made compulsory for all citizens irrespective of their sex with the aim of increasing the number of citizens in the military reserve, according to Reuters reported on Monday.

“I think we should have equality in this respect and I support this idea for all Latvian citizens of specific age… this should be done independently of their sex,” he stressed.

Also on Monday, Latvian President Egils Levits pointed out that the country may have to up its defence spending to minimise security risks posed by Russia.

Latvia is a NATO member and plans to increase its defence spending gradually from the current 2% of GDP or so to roughly 2.5% by 2025.

Levits noted that current plans include the construction of additional military bases in the country to accommodate more NATO troops, reminding us that the move was agreed upon at the NATO summit in Madrid in June.

He stressed that Latvia might have to increase its defence spending beyond what was agreed in Madrid. “Security is a priority of our politics today,” Levits pointed out and added, “2.5% [of GDP] is already committed now but maybe it would not be enough and we should be prepared for that.”

Neighbouring Lithuania recently announced plans to up defence spending to 3% of GDP, following in Poland’s footsteps.

Pabriks’ proposal to reintroduce mandatory military service and Levits’ plan to increase military spending are to be discussed in parliament become coming into force.

According to Latvia’s Ministry of Defence, military service should be voluntary in the period between 2023 and 2027, and become mandatory for all citizens in 2028.

Latvia was one of the first to propose using Russian state reserves seized by Western countries to finance rebuilding efforts in Ukraine, with Levits pointing out that EU law experts were examining legal options to implement the plan.