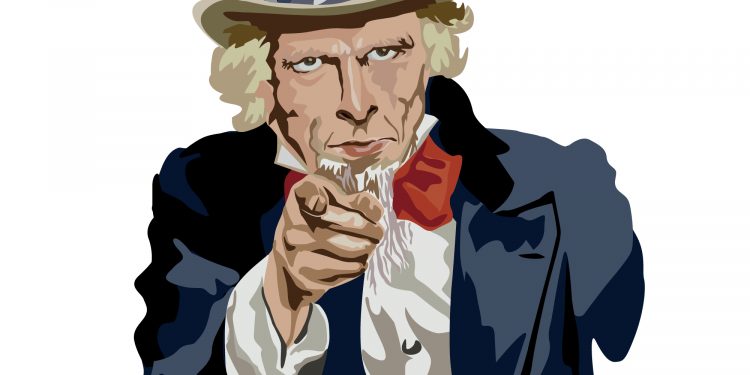 Portrait of Uncle Sam, historical character and famous symbol of the United States. He addresses himself to the American citizen so that he serves his homeland, pointing at him with an authoritarian a

New York (Brussels Morning) The notion that the American states are the laboratories of democracy is something that most Americans are taught in school and again through the media and punditry. This phrase was first coined by Supreme Court Justice Louis Brandeis almost a century ago and has become an important tenet of American folk wisdom since then.

It has also never really been true. For much of American history the states, or at least many of the states, lagged behind the federal government with regard to individual rights and freedoms. While it is true that states have explored policies that later became adopted at the national level – for example, many New Deal era policies were first tried in the state of New York – it is also true that in the south, American-style apartheid during the period between the end of Reconstruction and the mid-1960s was primarily supported by state law. In fairness to Justice Brandeis, his phrase is better understood as, and probably intended to be, describing states as being laboratories of policy, but that doesn’t quite have the same ring to it.

In recent years it has once again been the states, specifically those controlled by the GOP, that have played a leading role in limiting democracy and damaging the American people. For example, since the 2020 election several states including Arkansas, Florida and Georgia have passed laws that in one form or another limit access to the franchise. Similarly, the role that Republican governors like Ron DeSantis in Florida, Greg Abbott in Texas and Tate Reeves in Mississippi have played in spreading disinformation about Covid has contributed to the ongoing crisis in the US despite the access that almost all Americans have to masks and vaccines.

This week, the state of Texas passed an extremely restrictive and punitive anti-abortion law that, among other things, encourages Texans to report anybody involved in performing an abortion. Voter suppression laws, the open carrying of firearms – a policy that in practice in the US always only applies to white people – punitive criminal justice policies and more fill out the reactionary edifice that Texas Republicans have crafted. Texas laws are made by a legislature that has long benefited from voter suppression and gerrymandering and is only peripherally representative of the diverse Texas population.

Thus, in a very significant way, Texas is turning Justice Brandeis’s aphorism on its head and becoming a laboratory, not for democracy, but for authoritarianism. Texas is not the only Republican dominated state that is actively working to limit rights and create a less equal polity, but it is the most important one. Texas is a state the size of France with roughly 29 million residents, more than all but five EU member states. Fully one in 12 Americans live in Texas. Having one in 12 Americans live in a state with radically restrictive abortion laws, unequal access to the ballot, a complete and willful breakdown of the public health system and a dangerous policy of encouraging residents to arm themselves would be enough of a crisis for the US, but other smaller states, like Oklahoma, Arkansas and South Dakota are following Texas’ lead. Texas may not ultimately win this race to the authoritarian bottom, but it is blazing the trail.

Defenders of the “laboratories of democracy” conceit argue that people in different states have different opinions, lifestyles and cultures and should be able to craft policy accordingly. There is a whiff of truth to this, but also a few enormous problems with this thinking. First, when these differences, for example a deeper and more widespread racism among white residents of some states, lead to creating barriers to fundamental rights, such as the right to vote, for non-white residents of their state, federalism has undermined rather than strengthened democracy.

Additionally, although a state like Texas may have a conservative majority there are many in the state who do not share those views. A woman who is pro-choice and wants or needs an abortion, a trans person who wants to be treated fairly in the eyes of the law and others in Texas are now faced with the choice to either leave the state or be denied their rights.

The result of this is that the US is increasingly becoming two countries. Many Americans live in a flawed but largely functioning democracy that has a weaker social support system than many affluent countries, but still has a commitment to some equality and government services, but other Americans live in rightwing states that are the policy love-child of Ayn Rand and Jerry Falwell and whose leadership continues to participate in the Trump death cult.

Now that the Republican Party has less power in Washington, conservative controlled states like Texas are the laboratories, and indeed engines, of authoritarianism in the US. The new Texas abortion law, as well as the voter suppression crisis are reminders that in the American federalist system, even rights that are protected by the Constitution can still be undermined at the state level.