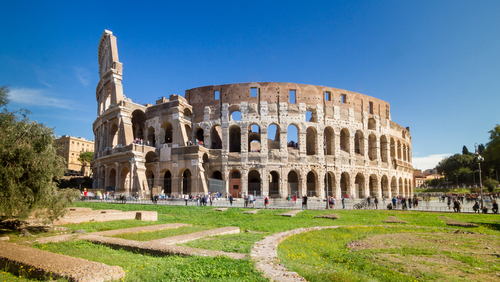 Rome, October 2017: Crowd of tourists visiting the iconic monument Colosseum, one of the New Seven Wonders of the World, on October 2017 in Rome, Italy

The President’s Office noted in a statement on Thursday that it would not accept the resignation and called on Draghi to give a statement to the Parliament, DW reports.

The Five Star Movement (M5S), a part of the ruling coalition, boycotted the vote of no confidence.

Speaking to Cabinet members after the parliamentary vote, Draghi announced plans to submit his resignation later on Thursday. He won the vote 172-39.

Draghi stressed that M5S is a coalition partner and added that he does not want to govern without the party’s support.

“The national unity coalition that backed this government no longer exists,” he pointed out.

The party has been losing support and MPs, and came under criticism from all parts of the political spectrum for opposing a bill that would allow the construction of a garbage incinerator outside Rome, lower taxes on fuel and introduce measures aimed at cushioning the blow of rising energy prices, among other.

Draghi is to address the parliament next week, before which he is to visit Algeria to discuss natural gas supply.

Mattarella could call on Draghi to form a new government, propose a caretaker PM to head the government until next parliamentary election slated for next year or call an early election.

MP Antonio Saccone expressed belief that Draghi’s departure risks “destabilisation of Europe” and stressed that M5S would be doing Russian President Vladimir Putin a favour by removing Draghi from office.

Financial markets responded to the vote of no confidence on Thursday, with Italian bond yields rising and shares dropping to the lowest level in the last two years or so.

Draghi previously pushed through some of the reforms that the EC demanded in order to release Italy’s coronavirus crisis recovery programme worth 200 billion euro. His potential resignation jeopardises the reforms and Italy’s access to the money.

The ECB announced it was preparing a new tool to prevent the spread between borrowing costs of EU member states from increasing.