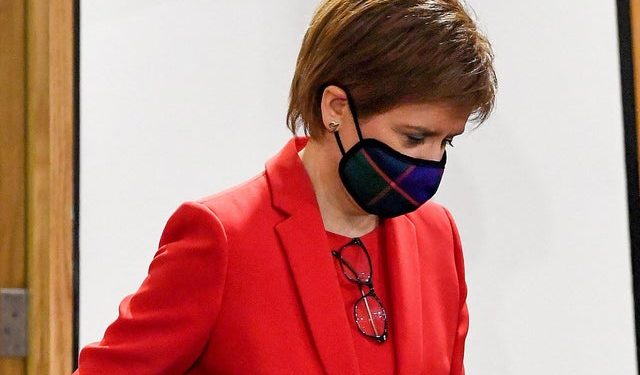 The former Scottish National Party (SNP) leader says Sturgeon and others broke conspired against him and that they broke ministerial code when investigating allegations of sexual misconduct.

Two committees will report on Salmond’s claims, the first having already heard evidence from the 66-year-old politician last week with Sturgeon speaking yesterday.

Key event start in March 2018 with a meeting between Sturgeon and Salmond’s former chief of staff Geoff Aberdein at her parliamentary offices on the 29th of that month. Sturgeon downplayed the encounter but witnesses say harassment accusations were discussed and a complainant name revealed.

This information contradicted claims Sturgeon made that she found out about the allegations on 2 April when Salmond came to her home and when he said she made clear she would intervene in the complaints process.

Sturgeon and Salmond have been political allies in the leadership of the SNP for more than decade and have overseen a campaign for Scottish independence from the rest of the UK, which has gained considerable ground over the last few years.

Sturgeon only made her knowledge of the events evident to the permanent secretary Leslie Evans on 6 June, and by 29 August Salmond launched a judicial review of the Scottish government’s handling of misconduct claims against him.

By the end of the year, the government conceded and on 8 January 2019, its inquiry was ruled unlawful, “tainted with apparent bias”, giving Salmond a 512,000-pound award to cover his legal costs.

Salmond was still charged with 14 sexual assault offences but was acquitted last year.

A policy is also in question, introduced in 2017, targeting sexist and inappropriate behaviour. It is under the guise of this policy that the women came forward to accuse Salmond of misconduct. Salmond believes this policy was always aimed at him and that Sturgeon misled Parliament by way of conspiracy against him.

The policy was also rewritten, removing the First minister’s role in the complaints process, with it stating she should only be informed of an investigation after it finished.

Sturgeon, however, has said Salmond’s accusations are retaliation for not colluding with him.

In a written submission, Sturgeon wrote:

“In what was a very difficult situation – personally, politically and professionally – I tried to do the right thing. Whether I always got it absolutely right is something I still reflect on, and the Committee will consider, but I sought all along to act in good faith and to strike the right balance of judgment given the difficult issues I was confronted with.

“In the light of the #MeToo movement, I sought to ensure that the Scottish Government developed a process that allowed allegations of sexual harassment – including allegations of a historic nature – to be fully and fairly considered.

“I did not do this because I had a concern… that allegations about my predecessor could materialise. But nor did I, in any way, allow such concern to lead me to limit the scope of the procedure.

“I agreed to meet a friend of 30 years when I was told he was in distress and wanted to talk to me about a serious matter. And it is certainly the case that I was anxious to prepare my Party as far as possible for an issue that, at different stages, I thought could be about to become public”.

The inquiry sought to answer key questions about when Sturgeon learned of concerns around Salmond’s alleged behaviour, why she continued speaking with him and if she offered to intervene on his behalf. It also sought to establish why Sturgeon took so long in informing the permanent secretary about what she knew and whether the first minister’s action went against legal advice as well as establishing any knowledge about the leak.

In the marathon session, Sturgeon insisted suggestions of a conspiracy were “absurd”, claiming evidence submitted by Salmond was presented out of context.

She said she simply refused to allow “the age-old pattern of allowing a powerful man to use his status and connections to get what he wants” to prevail.

Evidence also emerged that the Scottish government ignored legal advice that it would lose the judicial review. Sturgeon apologised for the “very serious mistake” and loss of taxpayers money.

Sturgeon has always insisted she forgot about meeting Aberdein on 29 March, in defence for its non-disclosure and she said exclusion of the first minister in the harassment complaints process was “appropriate”.

Commentators say the nationalist leader’s performance was a mixed bag, at times relaxed while at others under strain from contradicting evidence — opposition MSPs, in particular, showed incredulity at Sturgeon’s testimony.

While allegations of Salmond’s criminality was acquitted by a jury, Sturgeon noted he was not always appropriate, prompting Scottish Conservative Margaret Mitchell to remind the first minister that it was not Salmond on trial, but her.

The Scottish Conservatives will reportedly pursue a vote of no confidence in the first minister but there is little probability it will get the backing it needs, particularly while both committees are active.

The debacle comes at a particularly inconvenient time with elections due in May, which could be a keystone for a second referendum on Scottish independence, driven by the governing SNP.

However, the scandal has divided the party, with Salmond and Sturgeon with their respective backers. The possibility remains those fissures filter through to the polls in two months.