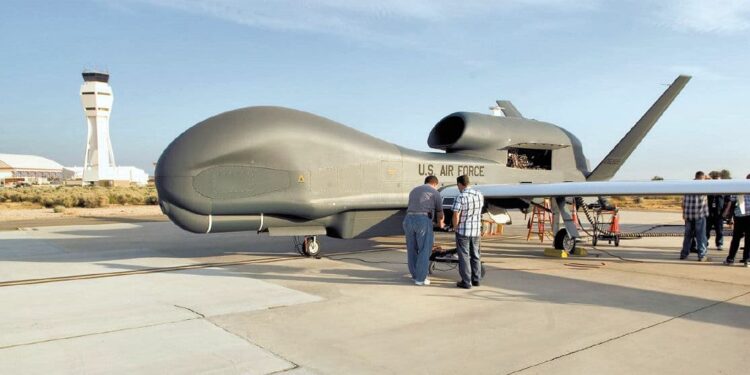 Brussels (Brussels Morning Newspaper) –  Unmanned aerial vehicles, or drones, have dramatically changed how the United States conducts military operations in recent decades. There is no doubting the value these platforms provide to the American war-fighting apparatus, from reconnaissance platforms that can loiter over combat zones for hours to armed drones that can deliver precision strikes against high-value targets. Many people are surprised to learn that many drone platforms are as large as any manned fighter, even though we frequently hear about them in the news. Let’s talk about how big military drones are in reality.

What is the largest military drone?

The RQ-4 Global Hawk is the military’s biggest unmanned aerial vehicle (UAV). This unmanned aerial vehicle (UAV) has a length of 47.6 feet, a wingspan of just over 130 feet, and a total weight of 14,950 pounds. It has a great deal to offer. Let’s look at the RQ4 and see what the fuss is all about. The American firm General Atomics Aeronautical Systems (GA-ASI), which specialises in aeronautics, was responsible for the product’s production.

In January of 1994, GA-ASI was given a contract to carry out the Tier II, medium-altitude endurance Predator project. The Predator system had its first flight in 1994, and manufacturing began in August 1997.

Missions of surveillance and reconnaissance were the RQ-4’s primary focus throughout its development. In 2002, the aircraft’s designation was modified to MQ-1. The RQ-4 is a multi-role vehicle that may be employed for armed reconnaissance and interdiction. It is equipped with Hellfire missiles from the AGM-114 series.

Military drones come in different forms and sizes. Most of us think of the bigger Predators, Reaper, and Global Hawk, but we forget about the smaller machines with more specialised applications. The Global Hawk’s wingspan is over 131 feet, yet the Black Hornet Nano fits in your hand.

Flying most military drones is unlike flying our quadcopters at home. We can easily handle a DJI Mini 2 by myself, yet it takes four qualified operators to fly an MQ-4C Triton.  Most branches of the military categorise these aircraft in numerous ways. Some by weight, some by capacity, etc. The DoD in the U.S. considers five categories of UAS.

Let’s start with Wasp AE. The original prototypes of this ship weighed a little under 1 lb, one for land, the other for water. The improved device weighs over 2 lbs and can land on water or ground.

This foldable drone has camera sensors and a 29-inch wingspan. Soldiers may load this gadget into a backpack for 45 minutes of flying up to 40 mph for basic surveillance and observation.

SOAR Oregon provide real-time fire maps to forest firefighters. Their ScanEagle is tiny enough to stay out of the way of firefighting activities. Not too tiny, it’s big enough to withstand winds at 20,000 feet. ScanEagle is a 40 kg drone that can fly up to 92 mph.

With the ScanEagle, you don’t need an airstrip. The craft doesn’t have landing gear. Instead, it takes off from a launcher that extends into a recovery system. Each wing features a hook that snags the cable held aloft by the extended launcher. The drone never has to contact the ground.

Blackjack has the same fundamental architecture as ScanEagle but is twice the size and weight. The only difference is the payload. The Blackjack can hold 55 lbs. of cameras and accessories. 545 Blackjack launchers and cable retrieval systems were in use worldwide in 2017.

This drone’s familiar. You must, right? The Predator is the military drone used in war movies and TV programs. Predator’s bulbous nose and V-tail have been popular since 1995. Later variants of the machine included two mounts for Hellfire, AIM-92 Stingers, or AGM-176 ground target missiles. The 50-foot-wingspan drone weighs 2250 lbs, has a 115-hp motor, speeds 135 mph at 25,000 feet, and can fly for 24 hours.

Read More: Russia to work with UN to unblock fertiliser stuck in EU

How big are military drones? The 65-foot-wide bigger craft weighs over 10,000 lbs. Flight duration is 14 hours; however, it can go 300 mph at 50,000 feet. Drones rule the sky. They’re also utilised for security and traffic management in non-warring areas. They also battle forest fires. Military drones are not all killing machines, especially the ones outfitted for life-saving missions.