by Tom Canetti
in Economy 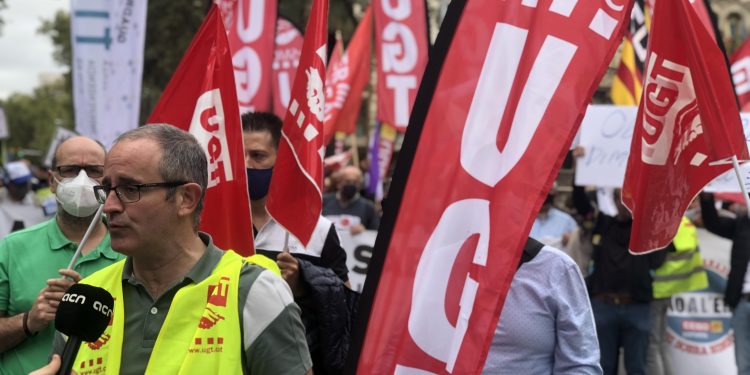 Brussels (Brussels Morning) A mass layoff by Sabadell, one of Spain’s top banks, has triggered the first ever general strike in the bank’s history.

Ten trade unions have banded together across Spain, demanding that no workers forcefully lose their jobs. Flags of the UGT and CCOO trade unions were waved defiantly in front of Bank Sabadell’s Barcelona offices in protest against the mass layoff that seeks to cut 1,730 jobs.

Major Spanish unions Unión General de Trabajadores (UGT) and Comisiones Obreras (CCOO) were joined by eight other unions in the strike action which were initiated on Wednesday. Another 24-hour strike is planned for Friday.

Sabadell, one of Spain’s top banks, wanted to cut 1,936 jobs and close 320 of its offices, while reducing another 176 branches to ATM service points. On Tuesday, the bank announced it would reduce the number of employees to be let go to 1,730. However, the unions rejected the proposal and on Wednesday protesters rallied outside the bank’s Barcelona offices.

The General Secretary of the UGT, Marcos García, told Brussels Morning that the unions were there to “fight against the mass layoffs of over 1,700 jobs and to fight for fair working conditions.”

He said that digitalization— referring to the increased use of technology by Sabadell Bank for jobs previously done by humans—“can go ahead”. But he added that it should not result in the forced dismissal of hundreds of workers, just so the board of directors can get richer. “The banks need the people. They cannot forcefully fire them under these conditions”.

The UGT Banco Sabadell branch issued a call to arms on its website to “all the unions represented in the bank,” saying that in no way could they accept the “savage layoffs Sabadell has put on the table.”

The union branch noted that the bank had declared a year-on-year increase in profits during the first half of 2021 amounting to 51.5% that reached 200 million euros.

Union heads accused the bank of “paying for the mismanagement of its directors with cuts and layoffs, whilst those responsible are compensated with millions.”

Should the pending layoffs go ahead, Catalonia and Madrid are likely to be the regions most affected.