Former head of Catalonia to fight on against extradition 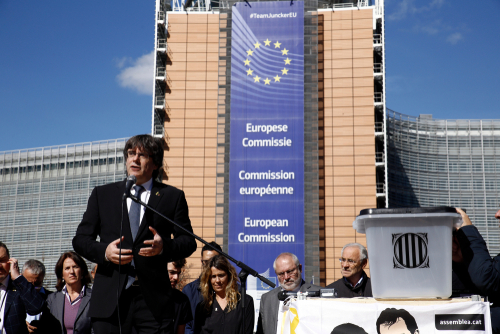 Brussels (Brussels Morning) Carles Puigdemont, former President of the Government of Catalonia, has announced plans to keep fighting against extradition to Spain should the European Parliament strip him of immunity, the Associated Press reported on Sunday.

Puigdemont and two other Catalan separatists – Toni Comín and Clara Ponsatí – fled Spain in 2017 after a failed secession attempt, deemed illegal by Spain. In 2019, they went on to win seats in the European Parliament.

Puigdemont’s regional government pressed forward with a referendum on Catalan independence despite being warned by Spanish courts that such a move would be unconstitutional.

On the day of the vote, hundreds of citizens were injured in the police crackdown and the referendum passed by a landslide as most unionists stayed away from the polls.

Official elections that took place after the referendum showed Catalans to be divided over the question of secession.

The EP is scheduled to vote on a move to strip the three of their immunity as lawmakers, a proposal put forward by the parliament’s Legal Affairs Committee.

“We contemplate all scenarios, obviously even that we will lose our immunity, which is the most likely”, Puigdemont stated on Saturday, adding that “we know that would not be the end of the road”.

Plan to bring case before the ECJ

The three plan to bring their case before the European Court of Justice (ECJ), he said, stressing that “the question is whether political persecution is accepted.”

In analysing their case last month, the Committee concluded it posed no threat of political persecution.

If their immunity is stripped, Spain could pursue the extradition of the three and bring them to trial as happened to the other separatist leaders who did not flee the country and were found guilty of sedition.

Courts in Belgium, Britain and Germany have thus far rejected Spain’s calls for extradition of Puigdemont and his colleagues. Were they returned to Spain, they would be detained immediately on the basis of outstanding arrest warrants.

“In Spain, the courts are not free of political interests”, Puigdemont maintained, noting that “the justice system is clearly biased and we are guilty from the start of any trial”.