Fighting in Gaza exacerbates the enclaves existing and monumental challenges

by Matthias Burchard
in Opinion 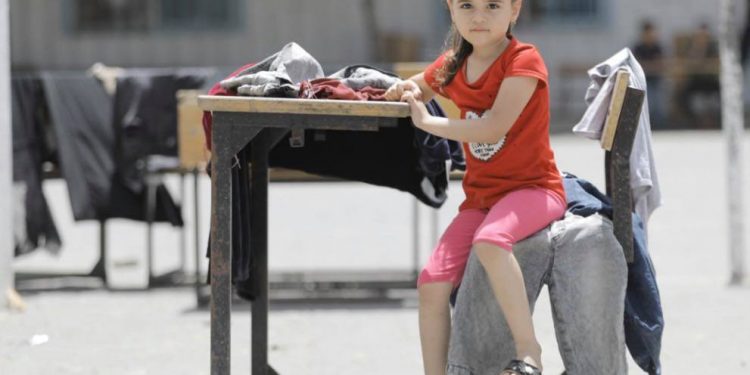 Displaced by airstrikes, a Palestine refugee child sits in the school yard of the UNRWA Salah Eddin School, one of 58 shelters of its kind in Gaza. These UNRWA schools have been designated as shelters for Palestine refugees during times of conflict. 17 May 2021 © 2021 UNRWA Photo By Mohamed Hinnawi

UNRWA’s job of supporting the occupied Palestinian territory of Gaza has been made that much harder by fighting, it needs support, writes Matthias Burchard.

Brussels (Brussels Morning) Before the latest conflict erupted between Israel and Hamas 10 days ago, Gaza had already been declared “unlivable” by 2020 following a UN study. In reality, the Strip seems to be a constantly unfolding humanitarian catastrophe suffocating under 14 years of aid, land and sea blockade, repeatedly destroyed by bouts of intense conflict that devastate its economy and infrastructure and entrenches unemployment and trauma among its inhabitants.

The global COVID-19 pandemic has added a serious blow to the hardship with the Strip suffering from one of the highest outbreaks and lowest vaccination rates registered. With all these layers of hardship, the current military escalation comes with a heavy toll on lives, livelihoods and the mental health of Gazans. So far, 213 people have been killed, including 61 children, and infrastructure has been devastated — including roads, civilian residential towers and Gaza’s central laboratory for Covid testing.

The United Nations Relief and Works Agency for Palestine Refugees in the Near East (UNRWA) provides protection and assistance to 1.4 million refugees in Gaza, equaling roughly 70% of the population. As of today, UNRWA’s 56 schools have been converted into shelters housing 56,220 internally displaced people (IDPs) who have placed their faith in the blue flag’s protective powers and are now in need of basic personal and humanitarian supplies. Such provision is rendered dangerous and difficult by the ongoing hostilities and lack of demarcated humanitarian corridors.

UNRWA has urgently requested that the government of Israel allows access to Gaza for its staff and for the delivery of humanitarian supplies meant to provide relief to the distressed population. Permission to access has also not yet been granted to the Agency’s highest official, Commissioner General Philippe Lazzarini.

The events in Gaza are unfolding amidst the background of the COVID-19 pandemic. This conflict has forced the Agency to temporarily pause its vaccination program, resulting in an increased risk of infections and deaths from the virus. This pause is especially worrisome in the schools and shelters, where large numbers of unvaccinated people are forced to closely gather in confined spaces. Despite the many challenges, UNRWA’s frontline staff bravely dedicate all of their time and effort to mitigating these dangers as best they can.

The Agency just released a pressing Flash Appeal (38 million dollars) to cover the most urgent humanitarian needs and to carry out essential emergency interventions. The priorities delineated by the appeal are maintenance of essential health services, improvement of psycho-social support, delivery of food and assistance to the vulnerable population whose properties have been damaged. The Appeal also includes a small component of emergency needs in the West Bank, including East Jerusalem, in the sectors of health, shelter, education, security and protection, where needs have risen as a consequence of the mounting tensions.

In the immediate term, fighting must stop, and the UN is actively engaging all sides towards an end to hostilities in Gaza. We continue to call on all parties to exercise maximum restraint and comply with their obligations under International Law, including with regards to the use of force and the protection of civilians, at all times.  Apart from providing urgent humanitarian aid, the EU should also try to exert its influence in the neighbourhood to call for a ceasefire.

UNRWA’s priority in Gaza is now to support the protection of civilians by assisting the families who have sought refuge in UNRWA schools. The escalation during these days is the direct consequence of the failure of the international community to resolve this conflict, including a just and lasting solution for Palestine refugees. It is the direct consequence of decades of displacement, occupation and blockade, and a reminder to us all that the status quo is untenable.

Editorial note: Since the draft of this op-ed a ceasefire was agreed overnight 20-21 May between Hamas and Israel.