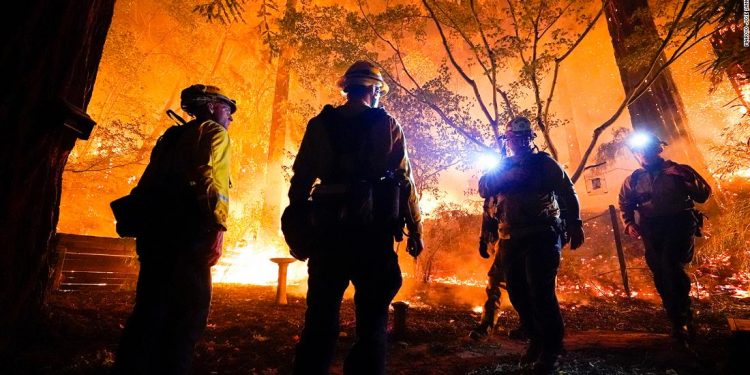 Firefighters make a stand in the backyard of a home in front of the advancing CZU August Lightning Complex Fire Friday, Aug. 21, 2020

Greece (Brussels Morning) While there were widespread evacuations, emergency services battled wildfires in large areas of southern Europe. Thousands of hectares of land have been devastated by fires in France, Greece, Portugal, and Spain, forcing thousands of people and tourists to leave.

States should have already invested in firefighting planning and infrastructure. For citizens to experience the same disaster every year is a political responsibility. The civil protection departments of the member states were aware at the UN level of the upcoming disaster and still refused to invest further. Mobilizing the mechanism after the wildfire appears, is simply put, not enough.

“Those emergency service workers and firefighters on the frontlines who are risking their lives to fight forest wildfires need to be supported. We have to minimize the risk of extreme wildfires by being better prepared: invest more in fire risk reduction, work with local communities, and strengthen global commitment to fight climate change,” said back in February Inger Andersen, UNEP Executive Director.

As temperatures continue to rise, wildfires have started in various locations throughout Italy, including Rome, Milan, and Florence. Firefighters in Tuscany fought to contain a wildfire that has caused hundreds of residents to flee, while a fire in northeastern Italy threatened to cut off the city of Trieste’s water and electricity and spread to Slovenia.

Over Mount Penteli, 27 kilometers north of Athens, in Greece, where around 500 firefighters, 120 fire engines, and 15 water-carrying planes battled a wildfire, dense smoke obscured the sky. “Yesterday’s fire in the area of Penteli had all the features of a situation which was very hard to manage,” Civil Protection Minister Christos Stylianides said.

According to Greek officials, nine towns and a hospital were evacuated, and police assisted at least 600 individuals in leaving fire zones.

In Croatia, the fire is spreading on many fronts threatening major infrastructure and businesses in the country. “In the last few hours, the situation has worsened; extinguishing fires from the air is greatly hampered by poor visibility. The headquarters determines measures depending on the development of the fire. Three settlements have been evacuated: Novelo, Temnica, and Vojščica. At the moment, our main task is protecting buildings,” the Minister of Defense Marjan Šarec announced.

If the member states are not able to present programming that will secure the forests, and the property of the citizens, then the management of the Civil Protection should pass to the level of Brussels. For more than a month, the citizens have become spectators of the same disaster, which is getting worse year by year.

As Europe’s forests are destroyed, Brussels expresses its solidarity but refrains from collective political decisions. The devastation caused by the fires, combined with rising temperatures and extensive drought is affecting the lives of all citizens of Europe.

Even the Scandinavian countries reached the point of being threatened by the fires with Sweden four years ago experiencing a major crisis.

In the Gironde region, in France, where the iconic Dune de Pilat, Europe’s highest sand dune and a popular tourist destination, is located, more than 34,000 people have been evicted from their homes and summer vacation destinations.

According to Marc Fesneau, France’s minister of agriculture, more funding is needed to fight wildfires. “We are having to confront a quite exceptional situation, we are talking about more than 20,000 hectares affected in Gironde, 1,500 in Finistere, and 1,500 in the Bouches du Rhone,” he stated.

The forest, which spans a million hectares, is essential to the paper, carpentry, and chemical industries. Energy companies also use it to create biomass.

Authorities in Spain said that there were approximately 20 wildfires that were still out of control and blazing in various regions of the nation, from the south to Galicia in the far north-west, where the fires had already consumed about 4,500 hectares of land.

Additionally, in the southern province of Andalusia, where 2,000 hectares of trees and plants were destroyed, firefighters were able to contain a blaze.

Hundreds of firefighters were mobilized across several regions including Zamora, in the northwest, and Valencia, in the southeast, to extinguish flames.

The nearly week-long heatwave in Portugal and Spain is thought to be responsible for more than 1,000 deaths so far according to World Economic Forum. Spain has experienced high temperatures of 45.7C.