EU bailout shows the meaning of ‘union’: powerful members helping out the weak 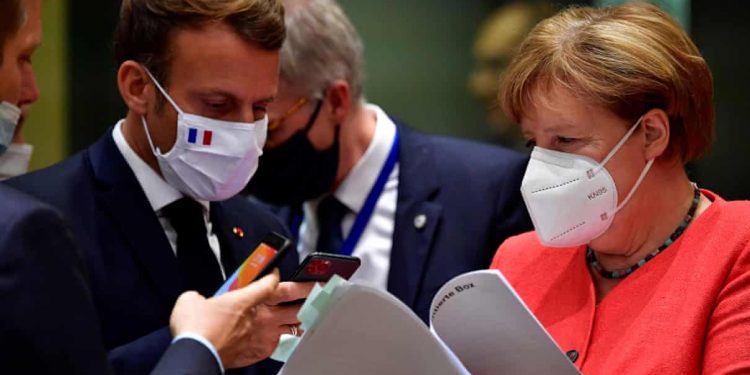 Back in May, critics of the EU gleefully pounced on news that the German constitutional court had ruled unlawful the European Central Bank’s plans to flood the financial system with cheap credit.

If the ECB was unable to expand its rescue mission for the eurozone, the euro itself was in danger and without the euro, the pillars of European political cooperation would collapse.

Last week EU leaders turned this gloomy outlook on its head. They agreed a €750bn bailout package that would provide grants and cheap loans to countries hit hard by the Covid-19 pandemic.

The deal will see the size of the EU budget doubling for the next three years, and significant financial transfers from the richest countries to the weakest. Italy, while not poor, can tap the fund for grants worth around 5% of its annual national income. Smaller and poorer nations will be able to access even more.

To say this is a panacea is to overstate the case. The heaviest lifting will still need to be done by national governments. They must judge where best to spend rescue funds to get their economies up and running, and cope with much of the extra debt on their balance sheets.

Topics such as the common agricultural policy and its many failings will be put on the back burner and the usual horse-trading over social cohesion funds will continue.

There is also lingering resentment over the way pleas to Brussels from Italy and Spain for help in procuring vital health equipment to deal with a flood of coronavirus cases fell on deaf ears.

Still, the EU has come together and struck a federalist note. Sure, the German constitutional court is in a spin, but it is probably powerless to rule on claims that the bailout goes beyond the powers given to Brussels in the many and complicated treaties agreed over the years.

The extent of the financial help Brussels is giving the 27 EU members is greater than ever before and to some extent answers those who have been calling for some time for a higher level of cooperation.

Ever since the EU crisis of 2012, when it became clear that Greece, Ireland and Portugal could not cope with their spiralling debts and Spain and Italy were clearly struggling with rising interest payments, there have been calls for the EU to raise funds on behalf of all member states, and especially those inside the eurozone.

These so-called euro bonds would in effect put the Dutch on the hook for Italian debt payments, and see the Finns covering shortfalls run up by the Greeks. When the Covid-19 pandemic hit, calls for such moves intensified. Campaigners demanded the EU move quickly to use “corona bonds” to share the pain of the latest crisis.

The €750bn deal does not extend to creating corona bonds, but it does create a market for the debt raised. What this means is that private investors will track the loans as if they are bonds, and the interest rate applied to them, as if they are a collective entity. It is the sort of sleight of hand the EU is famous for – though some also decry its lack of transparency. Yet the measures do almost add up to EU-wide bonds.

The richer countries that were most resistant to any deal – the Netherlands, Austria, Sweden and Denmark – wanted a veto over the management of the debt, but have acceded to majority voting.

Now the EU must put some flesh on the bones of the deal. For instance, officials will need to battle resistance from the “frugal four” as these countries seek to minimise how much money is distributed.

And they will need to make a better job than Boris Johnson did in his trip to Scotland last week of promoting a union of nations and the benefits of pooling resources in an increasingly uncertain world.

Children see fewer junk food ads than ever, but obesity is still growing

A year ago, ITV’s chief executive, Carolyn McCall, challenged ministers’ proposal for a pre-9pm ban on TV junk food ads by citing the government’s own evidence that it would cut just 1.7 calories from a child’s diet each day – the equivalent of half a Smartie.

The broadcasters’ view is that, while a ban is hardly likely to solve the UK’s soaring obesity problem, they will face the loss of more than £200m in advertising a year as the government looks set to press ahead regardless with a ban on commercials featuring products high in fat, sugar and salt.

The TV industry has faced the prospect of the ban several times and managed to steer a path to less draconian restrictions. Junk food ads are banned from children’s TV shows and any programme that has an audience of under-16s that is 20% higher than a typical show.

While The X Factor escapes those rules, not much else does. Wider restrictions, such as a ban on targeting children with online ads – the government is also expected to totally ban junk food ads online – or using characters such as Kellogg’s Tony the Tiger to push sugary cereals, have had a significant impact.

Industry bodies say children’s exposure to junk food ads has shrunk by 70% in a decade. But the nation’s waistline has continued to expand, with 64% of adults and 30% of children overweight or obese.

Some brands are certainly viewed to be gaming the rules. McDonald’s has run Pokémon-themed Happy Meal ads in episodes of Peppa Pig because the products shown did not breach junk food regulations, yet the home of the Big Mac is seen by many as the frontline in the war against obesity.

This is a health crisis that needs to be addressed. Nonetheless, Boris Johnson’s current approach appears to be based more on headlines than science.

Tesla doesn’t do advertising; it relies instead on the showmanship of chief executive Elon Musk, and prefers a good helping of controversy to a marketing campaign. But the appeal of the US carmaker is clear: the freedoms that the automotive age has delivered to the global middle classes, combined with zero exhaust emissions.

The green image has made the carmaker one of the world’s most-valuable companies. And last Wednesday it reported its fourth consecutive quarterly profit – even if it has yet to report a full financial year in the black.

However, last week’s results showed that the profitability that has propelled Tesla to the status of the world’s most-valuable carmaker, despite it having a small fraction of the output of nearest rival Toyota, has come at an environmental cost.

Tesla’s $104m (£82m) net income for the quarter was dwarfed by $428m in earnings from “regulatory credits” sold to other carmakers, namely Fiat Chrysler and GM, who would otherwise face fines potentially worth billions of dollars and euros for breaking emissions limits. The carmakers pay to artificially lower the emissions they report, benefiting from Tesla’s zero emissions in the US and EU. The deals add up to $1.2bn of, essentially, free money since the second quarter of 2019 – far outweighing any recent profits.

In one regard there is poetic justice in the fact that more-polluting carmakers will essentially be paying for Tesla’s new factories, and the company would rightly argue that it is a pioneer in lowering car emissions. Yet there is also a very unappetising aspect: Tesla has enabled the production and profitable sale of thousands of polluting cars.

The company had $8.6bn in cash or its equivalent at the end of the second quarter, so a combination of the credits and its sales have staved off short-term liquidity issues. But its side deal on emissions credits underlines that cleaning the global economy can be a grubby job.