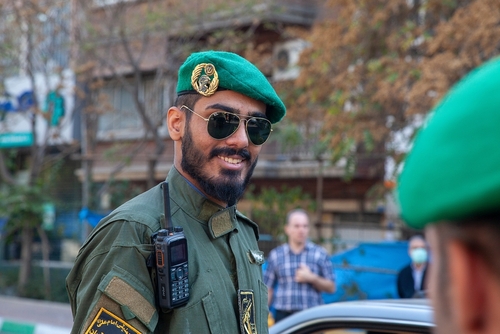 Tehran Iran - November 4, 2022, the face of a force of Iran's Islamic Revolutionary Guard Corps. In the march of the National Day against Arrogance, military forces were present with the people.

Following the vote where MEPs overwhelmingly called for blacklisting the IRGC, Iran warned the bloc against the move, according to France24 reporting on Thursday.

Hossein Amir-Abdollahian, Iranian Minister of Foreign Affairs, stated that the EU would “shoot itself in the foot” if it designated the IRGC as a terrorist organization and warned that Iran would take “reciprocal measures” if the EU proceeds.

“We have repeatedly said the Revolutionary Guards are a formal and sovereign organization whose role is central for guarding Iran’s security,” he reminded and added “steps taken by the European Parliament to list the organization protests as terrorist are in a way a shot in the foot of Europe itself.”

On Wednesday, the EP pointed out that the IRGC repressed protests in Iran and supplied drones to Russia, calling on the EU to blacklist the organization.

The vote is non-binding but came a week ahead of the meeting of EU foreign ministers in Brussels, where they are to discuss additional sanctions against Iran.

In September last year, anti-government protests erupted in Iran after the death of a woman detained for violation of Iran’s dress code, with the EU Parliament condemning Tehran’s crackdown on protests and noting that the IRGC took part in it.

Some EU member states have started the process of blacklisting the IRGC over the crackdown, which would allow nations to hit Iran with additional sanctions. Critics previously warned that the move would further harm relations with Iran, which are already poor, and expressed belief that the designation would be easily challenged.

However, sentiment in the EU Parliament has changed as Iranian ex-pats called this week for listing the IRGC as a terrorist organization over the crackdown, among others.

Since 2021, Iran has been negotiating with Western powers, including EU member states France and Germany, on the revival of the Joint Comprehensive Plan of Action (JCPOA), commonly known as the Iran nuclear deal.

While the two sides made some progress, talks are in a stalemate since September last year.