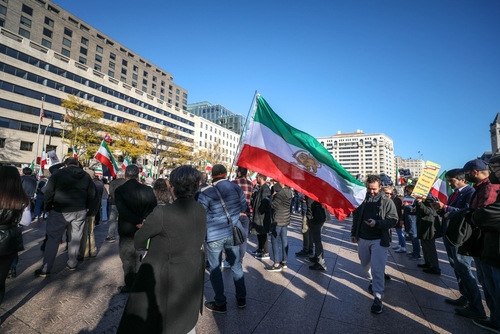 Washington, D.C., USA - November 26, 2022: Iranian Americans rallied in Freedom Plaza in support of and solidarity for the overthrow of the government in Iran in the aftermath killing of Mahsa Amin.

Based partially on reporting by PMOI (MEK) Network in Iran

Belgium, (Brussels Morning Newspaper) The New Year 2023 arrived as the world is witnessing a revolution unfolding in Iran. Brave Iranians, especially women and youth in various cities are constantly taking to the streets in their anti-regime protests while chanting slogans against the clerical leadership. They are specifically targeting the regime’s Supreme Leader Ali Khamenei and his entire apparatus of suppressive forces.

January 3, the 110th day of the nationwide uprising, marks the third anniversary of the elimination of Qassem Soleimani, the notorious head of the Iranian regime’s Revolutionary Guards Quds Force. Yesterday, it was reported that Britain will officially declare the IRGC, as a terrorist group following several alleged plots to kidnap or murder UK citizens.

Tuesday, protesters and courageous locals across Iran expressed their hatred of Soleimani, and the regime in its entirety, by using Molotov cocktails and homemade explosives, and set to fire Soleimani’s posters, banners, placards, and billboards. The regime’s sites, along with statues and billboards symbolizing the mullahs’ dictatorship, are among other frequent targets. And people are specifically focusing on images and anything symbolizing regime Supreme Leader Ali Khamenei and his entire apparatus of suppressive forces.

In Gilan Province, northern Iran, contract workers of the state communications company were on strike today demanding answers to their long-raised dilemmas.

In Javanrud, western Iran, regime security forces raided people’s homes in the middle of the night and arrested many people. Locals say several dozen vehicles and hundreds of heavily armed units have been patrolling their streets. On Monday, in the restive city of Javanrud in Kermanshah Province, western Iran, the authorities dispatched many security units to the streets following the recent unrest. Internet connection is heavily disrupted. Reacting to the latest suppressive measure, the NCRI President-elect, Mrs. Maryam Rajavi, said: Khamenei’s Intelligence Ministry and IRGC attacked people’s homes in Javanrud, arresting the city’s youths to prevent the continuation & spread of Iran protests. Such cruelties only add to the Iranian people’s fury and motivation to topple the regime.

Early reports on Sunday morning indicated that merchants and storeowners in the city bazaar of Javanrud were on strike in solidarity with the ongoing protests against the regime in this city and across the country. Similar strikes were reported in a section of Tehran’s famous Grand Bazaar, the city of Marivan in Kurdistan Province, and in Kermanshah, western Iran.

On Monday, In the city of Mahabad, northwest Iran, locals gathered to mark the 40th day of Shomal Khadiripour’s murder by the regime’s security forces and began chanting: “Death to Khamenei!”, “So many years of crimes! Death to the mullahs’ regime!”, “Kurds and Baluchis are brothers!” in solidarity with the Baluch of Sistan & Baluchestan Province, and “Down with the principle of Velayat-e Faqih (absolute rule of the clergy)!”. The crowd continued their ceremony by heading into the town from the cemetery and launching a protest march against the regime. The authorities have dispatched a large number of security forces to the city to prevent further anti-regime protests.

Protesters and courageous locals have also been using Molotov cocktails and homemade explosives to target the regime’s sites, along with statues and billboards symbolizing the mullahs’ authoritarian dictatorship.  They are specifically targeting regime Supreme Leader Ali Khamenei and his entire apparatus of oppressive forces and finally, Khamenei’s criminal judiciary sentenced 18-year-old Mehdi Mohammadi Fard one of those arrested in the uprising in the city of  Nowshahr northern Iran to death twice on the charges of “moharebeh (waging war on God)” “inciting the people with the intention of disrupting the security of the country” and “insulting Khamenei”.