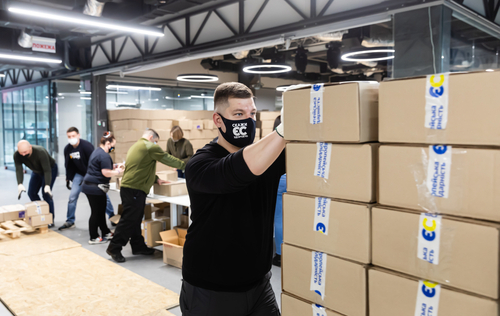 This is the first tranche of the second aid package worth 1.59 billion euro, the European Commission pointed out in a statement on Thursday.

The body noted that the EIB disbursed the first tranche of its Ukraine Solidarity Urgent Response on Wednesday, pointing out that the bank developed the package in cooperation with the EC.

It added that the EIB fully disbursed its first support package worth 668 million euro in roughly one month after the start of the war in Ukraine.

The Commission stressed that the first tranche of the second aid package “will help the Ukrainian government cover priority short-term financing needs and ensure urgent repairs of damaged road, bridges and railway infrastructure.”

“Repairs of the train network, roads and bridges will help Ukraine keep people, goods and grain moving,” the EC pointed out and added “with Ukraine being one of the biggest exporters of grain in the world, these vital interventions will help its economy recover and improve connectivity with the EU.”

The latest aid package includes more than one billion euro in immediate assistance, with EIB noting that it will make further payments in the coming days.

In addition, the package includes some 500 million euro for financing EIB-supported projects in the country.

Valdis Dombrovskis, European Commissioner for Trade, pointed out that EIB’s package is backed by EU guarantees and stressed that it will have “a real impact on the ground in Ukraine.”

“It will help Ukraine to address its most urgent funding needs and repair key road and railway infrastructure damaged by Russia’s aggression… this support is vital for Ukraine’s people and economy,” he added.

He reiterated that the EC stands with Ukraine and concluded that it will provide more aid to the country in the coming period.

“We are working closely with the government of Ukraine to ensure that the country can keep and resume its most critical functions in the face of such enormous challenges and suffering,” he concluded.