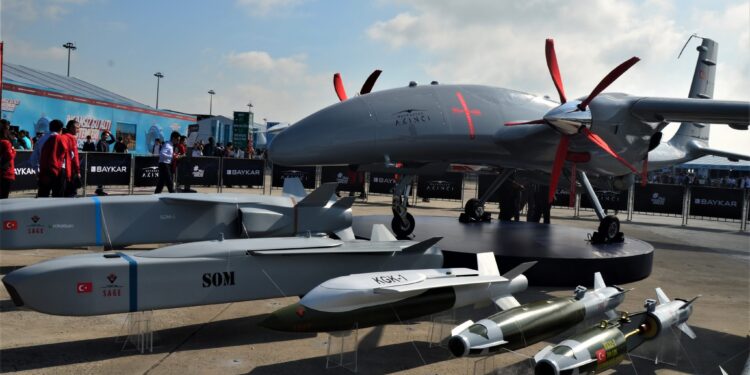 Turkey drone makers are investing in making more Turkish kamikaze drones as they are in huge demand mainly because of their unique features. In the last few years, Turkey has emerged as one of the giants in the creation of strike and reconnaissance unmanned aerial vehicles.

Over the years the Middle East has been an ideal place to test the capabilities of the armed drone to get them in use. This is particularly true in countries like Libya and Syria. However, Turkey stands on the top in terms of benefiting from the success of drones in war zones compared to any other country.

The roaring success of the existing Turkish drones has pushed Turkish companies to develop and produce more new drones. According to Turkish government authorities, a lot of countries have already placed an order to get their new Turkish drones this year.

A Turkish state-controlled firm said that it has established a new supersonic drone that is undergoing flight testing.

Turkish aerospace industries said that the supersonic drone fighter is a part of the Simsek high-speed target drone project. On the other hand, TAI has also developed algorithms and payloads under the program.

Simsek is launched from a different, larger unmanned aerial vehicle which is making it representative of a new generation of drones that do not need the assistance of manned vehicles to deliver them to combat sites.

Temel kotli, CEO of Turkish Aerospace said in an interview “The new drone is capable of carrying up to 5 kg of explosives and can deliver them to a distance of about 100-200 km after being launched from another UAV”.

Turkey drone Company officials also highlighted that the supersonic combat drone will be used in electronic assault, electronic support and decoy mission.The new drone is 3 metres long and features a mini-turbojet engine that helps it fly at least as fast as Mach 1.

The supersonic attack drone was initially developed on the basis of a catapult launch system that can be installed on ships but in 2020, the drone was grafted into the Anka UAV of Turkish aerospace which was repeatedly tested in real combat conditions.

Several experts predict that launching a Simsek Kamikaze drone from another UAV not only increases the range but also increases the ability to attack targets even from a greater distance.

One of the revolting features of the Simsek kamikaze drone is the absence of optical sensors or data transmission channels. Without them, the drone works more like a traditional air to ground missile aimed at pre-selected targets. However, the company is yet to reveal its guidance method.

Turkey kamikaze drone has a line of sight data link and is capable of operating in completely autonomous mode. This particular feature makes it very easy to attack static targets and there is room for the developer to add a more complex guidance system.

One of the plus points of the kamikaze drone is its high speed. It moves quickly and has good manoeuvrability. The cost of production for these kinds of the drone is very cheap as compared to any other.

These are the reason that these kamikaze drones are becoming more popular with each passing day and not only the Turkish military is eyeing to have them to strengthen their defence system but other countries are making efforts to own them. The USA is also thinking of purchasing them for military purposes.

Turkey kamikaze drones also have some drawbacks, one of them is the little weight of the warhead which decreases its structure potential.

Turkey may have already used its Simsek Kamikaze drones in Azerbaijan to test their mettle and efficiency. After its success in Azerbaijan, Kazakhstan is also eyeing to have one of those drones to use in their favour. Turkey’s drone success is attracting a number of countries to make purchases.

According to the Turkish president, a lot of countries are in line to purchase the Turkish drones and several export agreements have been made with countries including NATO member Poland.

Turkish drones are in huge demand after the massive success of its domestic-made TB2 drone. So many countries around the world are eyeing the Turkish drones. Among all other countries Azerbaijan, Morocco, Tunisia and Ukraine are the top buyers of Turkish drones in 2021.